LA JOLLA--(January 15, 2019) Salk researchers have mapped the genomes and epigenomes of genetically modified plant lines with the highest resolution ever to reveal exactly what happens at a molecular level when a piece of foreign DNA is inserted. Their findings, published in the journal PLOS Genetics on January 15, 2019, elucidate the routine methods used to modify plants, and offer new ways to more effectively minimize potential off-target effects.

"This was really a starting point for showing that it's possible to use the latest mapping and sequencing technologies to look at the impact of inserting genes into the plant genome," says Howard Hughes Medical Institute Investigator Joseph Ecker, a professor in Salk's Plant Molecular and Cellular Biology Laboratory and head of the Genomic Analysis Laboratory.

When a scientist wants to put a new gene into a plant--for basic research purposes or to boost the health or nutrition of a food crop--they usually rely on Agrobacterium tumefaciens to get the job done. Agrobacterium is the bacteria that causes crown gall tumors, large bulges on the trunks of trees. Decades ago, scientists discovered that when the bacteria infected a tree, it transferred some of its DNA to the tree's genome. Since then, researchers have co-opted this transfer ability of Agrobacterium for their own purposes, using its transfer-DNA (T-DNA) to move a desired gene into a plant.

Recently, DNA sequencing technologies had started to hint that when the Agrobacterium T-DNA is used to insert new genes into a plant, it may cause additional changes to the structural and chemical properties of the native DNA.

"Biotech companies spend a lot of time and effort to characterize transgenic plants and disregard candidates with unwanted changes without understanding--from a basic biological perspective--why these changes may have occurred," says Ecker. "Our new approach offers a way to better understand these effects and may help to speed up the process."

"The biggest unknown was whether, and how many copies of, the T-DNA were inserted at the same time as the piece you wanted," says Florian Jupe, a former Salk research associate who now works at Bayer Crop Science. Jupe, Salk Staff Researcher Mark Zander and Research Assistant Angeline Rivkin are co-first authors of the new paper, along with Todd Michael of the J. Craig Venter Institute.

Since the T-DNA approach can lead to an integration of many copies of a desired gene into a plant, it can be difficult to study the final result with standard DNA sequencing, as most technologies struggle to sequence highly repetitive stretches of DNA. But Ecker and his colleagues turned to a new combination of approaches--including optical mapping and nanopore sequencing--to look at these long stretches in high resolution. They applied the technologies to four randomly selected T-DNA lines of Arabidopsis thaliana, a commonly used model plant in biology. (These plants are derived from a large population of T-DNA insertional mutants that were created using an Arabidopsis transformation method, called floral dip, to study gene function.)

Optical mapping revealed that the plants had between one and seven distinct insertions or rearrangements in their genomes, ranging in size by almost tenfold. Nanopore sequencing and reconstruction of the genomes of two lines confirmed the insertions to single-letter resolution, including whole segments of DNA that had been exchanged--or translocated--between chromosomes in one of the selected lines. Gene insertions themselves showed a variety of patterns, with the inserted DNA fragment sometimes scrambled, inverted or even silenced.

"This study was not possible even a year ago," says Michael. "Nanopore sequencing, which some refer to as the 'holy grail' of DNA sequencing, has revolutionized the reading of even the most complex regions of the genome that were completely inaccessible and unknown until now."

Finally, when the researchers studied packets of genetic material called histones they found additional changes. Histone proteins package DNA into structural units, and modifications of these histones mediate whether a gene can be accessed for use by a cell (a level of regulation called epigenetics). Depending on where T-DNA was integrated, certain nearby histone modifications appeared or disappeared potentially changing the regulation or activation of other nearby genes.

"Now we have the first high-resolution insights on how T-DNA insertions can shape the local epigenome environment," says Zander.

In an ideal world, the researchers say, T-DNA would insert one single, functional copy of a desired gene with no nearby side effects on a plant's genome. While their findings show this is rarely the case in Arabidopsis, their methods offer a path to a better understanding and surveillance of the effects.

"This technology is exciting because it gives us a much clearer look at what's going on in some of these transgenic Arabidopsis lines," says Rivkin.

"With Arabidopsis, it's relatively easy because it has such a small genome, but because of continued improvements in DNA sequencing technology, we expect this approach will also be possible for crop plants," adds Ecker, who holds the Salk International Council Chair in Genetics. "Current methods require screening of hundreds of transgenic lines to find good performing ones, such as those without extra insertions, so this technology could provide a more efficient approach."

Other researchers on the study were Justin Sandoval, Huaming Chen, Rosa Castanon and Joseph Nery of the Salk Institute; Timothy Motley of the J. Craig Venter Institute; and Keith Slotkin of the Donald Danforth Plant Science Center.

The work and the researchers involved were supported by grants from the Human Frontier Science Program, the Salk Pioneer Postdoctoral Endowment Fund, Deutsche Forschungsgemeinschaft and the Howard Hughes Medical Institute.

Every cure has a starting point. The Salk Institute embodies Jonas Salk's mission to dare to make dreams into reality. Its internationally renowned and award-winning scientists explore the very foundations of life, seeking new understandings in neuroscience, genetics, immunology, plant biology and more. The Institute is an independent nonprofit organization and architectural landmark: small by choice, intimate by nature and fearless in the face of any challenge. Be it cancer or Alzheimer's, aging or diabetes, Salk is where cures begin. Learn more at: salk.edu 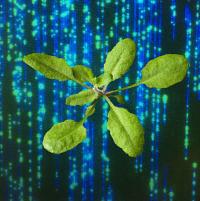