CHICAGO -- What may well turn out to be the definitive work in a debate that has been raging in palaeoanthropology for two years will be published in the November 2006 issue of Anatomical Record.

The new research comprehensively and convincingly makes the case that the small skull discovered in Flores, Indonesia, in 2003 does not represent a new species of hominid, as was claimed in a study published in Nature in 2004. Instead, the skull is most likely that of a small-bodied modern human who suffered from a genetic condition known as microcephaly, which is characterized by a small head.

"It's no accident that this supposedly new species of hominid was dubbed the 'Hobbit;'" said Robert R. Martin, PhD, Curator of Biological Anthropology at the Field Museum and lead author of the paper. "It is simply fanciful to imagine that this fossil represents anything other than a modern human." The new study is the most wide-ranging, multidisciplinary assessment of the problems associated with the interpretation of the 18,000-year-old Flores hominid yet to be published. The authors include experts on:


This is just one of four separate research teams that have recently published evidence indicating concluding that the Flores hominid is far more likely to be a small-bodied modern human suffering from a microcephaly than a new species derived from Homo erectus, as was claimed in the original Nature paper.

Significantly, the second most recent publication to conclude that the "Hobbit" was microcephalic--another multidimensional study that was published in the September 5, 2006, issue of Proceedings of the National Academy of Sciences--includes a co-author who was also a co-author of the original publication in Nature. That scientist, R.P. Soejono of the National Archaeological Research Center in Jakarta, Indonesia, now writes that the Flores hominid was microcephalic rather than a new hominid species.

Rewriting science
The starting point for the new research in Anatomical Record was the realization that the brain of the Flores skull (at 400 cc, the size of a grapefruit and less than one-third of the normal size for a modern human) is simply too small to fit anything previously known about human brain evolution. In addition, the stone tools found at the same site include types of tools that have only been reported for our own species, Homo sapiens.

Brain size of the Flores hominid, originally called Homo floresiensis, is known only from the main specimen discovered there, the LB1 skeleton. Skeletal fragments have been attributed to eight other individuals, but nothing can be said about their brain sizes. (They are small-bodied, but that has never been at issue.)

The new exhaustive research shows that the LB1 brain is simply too small to have been derived from H. erectus by evolutionary dwarfing, as was claimed by those who discovered it. In fact, the size of the brain corresponds very closely to the average value for modern human microcephalics. Microcephaly is a term that covers many conditions. There are more than 400 different human genes for which mutations can result in small brain size. Accordingly, there is a correspondingly wide range of different syndromes that are recognized in clinical practice. Many syndromes involve pronounced deficits ("low-functioning microcephaly"), but some have milder effects ("high-functioning microcephaly"), permitting survival into adulthood and a surprising degree of behavioral competence in certain cases. Microcephaly is often associated with severely reduced stature, but some microcephalics have relatively normal body size.

Also, it has been claimed that LB1 had unusually large teeth ("megadonty"). However, it turns out that the teeth are not particularly large, after allowing for the expected effect of dwarfing. They are actually closely similar in size to those of a modern human microcephalic.

Another area of controversy concerns the stone tools discovered in association with the Flores fossils. Initially, the discoverers claimed that the tools were sophisticated, as indeed they are. More recently, continuity has been claimed with tools from Mata Menge on Flores that are purportedly 800,000 years ago. This is simply implausible, according to the authors of the new research.

"Nobody has even claimed cultural continuity in stone tool technology over such a long period (800,000 to 18,000 years ago)," Dr. Phillips said. "To do so ignores the significance of tools found with the LB1 skeleton that were made with the advanced prepared-core technique, otherwise confined to Neanderthals and modern humans."

There has been too much media hype and not enough sound scientific evaluation surrounding this discovery, Dr. Martin concluded. "Science needs more balance and less acrimony as we continue to unravel this discovery."

• Compare these skulls
On the left is the LB1 skull, found on the Indonesian island of Flores. It is the basis for claims that the Flores fossils represent a new species of hominid, or humanlike primate. Note, however, that this skull is very similar to the one on the right (from the Royal College of Surgeons in London) of a modern adult human who suffered from microcephaly. The close similarity between these two skulls, which are drawn to the same scale, indicates that the LB1 skull from Flores could well be that of a modern human microcephalic rather than representing a new hominid species. Drawing by Jill Seagard, Courtesy of The Field Museum

• Modern adult with microcephaly – Royal College of Surgeons
Skull cast and cast of the endocranial cavity (endocast) from the Royal College of Surgeons in London of a modern adult human who suffered from microcephaly. It is strikingly similar to the following skull and endocast of a 32-year-old microcephalic woman. Together, the two specimens provide evidence that the LB1 skull from Flores, which is so similar to these two specimens, could also have been a microcephalic adult. Photo by John Weinstein, Courtesy of The Field Museum (Negative # Z94438_07Ad)

• Another modern adult with microcephaly – Lesotho woman
Skull cast and cast of the endocranial cavity (endocast) from a 32-year old woman who had the body size of a 12-year-old child. She lived in Lesotho, a county in Southern Africa, and these casts are part of The Field Museum's collection (Accession Nos. A219679 And A219680). This specimen and the one above have a relatively normal exterior appearance despite their very small size. Together they demonstrate that the LB1 skull from Flores could also have been an adult who suffered from microcephaly. Photo by John Weinstein, Courtesy of The Field Museum (Negative # Z94438_01Ad)

• Graph showing outlier
This graph shows the cranial capacities in cubic centimeters for 118 fossil hominids plotted against time, extending back almost 3.5 million years. The arrow indicates the highly incongruous value reported in Nature by Brown et al. in 2004 for H. floresiensis, described as an insular dwarf derived from Homo erectus. The relatively tiny brain size only 18,000 years ago does not fit into known patterns of hominid brain size and development. It is "off the chart." Graph by Robert D. Martin, Courtesy of The Field Museum

• Robert D. Martin
Robert D. Marin, PhD, Curator of Biological Anthropology at The Field Museum, has devoted his career to studying primate development and evolution. In his quest to achieve a reliable reconstruction of primate evolutionary history, Dr. Martin has studied an extensive array of characteristics in the living species, including anatomical features, physiology, chromosomes and DNA. Dr. Martin has been particularly interested in the brain and reproductive biology, as these systems have been of special importance in primate evolution. With skeletal features, it is possible to include the fossil evidence and thus to include geological time in the picture. By studying living primates in the field in the forests of Africa, Madagascar, Brazil and Panama, Dr. Martin has also been able to include behavior and ecology in an overall synthesis. That synthesis was first presented in his textbook Primate Origins and Evolution, published by Princeton University Press in 1990. Since then, he has been working on refinements in several different directions. Photo by John Weinstein, Courtesy of The Field Museum (Negative # GN90075_36Ac)

• Jim Phillips
James Phillips, PhD, Departments of Anthropology at the University of Illinois at Chicago and the Field Museum, is an expert on stone tools. Initially, the discoverers of the Flores fossils claimed that the tools found in association with the fossils were sophisticated, as indeed they are. More recently, continuity has been claimed with tools from Mata Menge on Flores that are purportedly 800,000 years ago. This is simply implausible, according to the authors of the new research. "Nobody has even claimed cultural continuity in stone tool technology over such a long period (800,000 to 18,000 years ago)," Dr. Phillips said. "To do so ignores the significance of tools found with the LB1 skeleton that were made with the advanced prepared-core technique, otherwise confined to Neanderthals and modern humans." 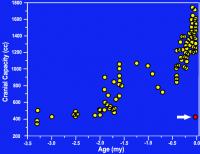