A team from the Okinawa Institute of Science and Technology Graduate University (OIST) and its collaborators has sequenced the genomes of two species of small water creatures called acorn worms and showed that we share more genes with them than we do with many other animals, establishing them as our distant cousins.

The study found that 8,600 families of genes are shared across deuterostomes, a large animal grouping that includes a variety of organisms, ranging from acorn worms to star fishes, from frogs to dogs, to humans. This means that approximately 70% of our genes trace their ancestry back to the original deuterostome. By comparing the genomes of acorn worms to other animals, OIST scientists inferred the presence of these genes in the common ancestor of all deuterostomes, an extinct animal that lived half a billion years ago. This research shows that the pharyngeal gene cluster is unique to the deuterostomes and it could be linked to the development of the pharynx, the region that links the mouth and nose to the esophagus in humans. These findings were published in Nature, summarizing an international collaboration between OIST researchers and teams from the US, UK, Japan, Taiwan and Canada.

Around 550 million years ago, a great variety of animals burst onto the world in an event known as the Cambrian explosion. This evolutionary radiation revealed several new animal body plans, and changed life on Earth forever, as complex animals with specialized guts and behavioural features emerged. Thanks to the genome sequencing of multiple contemporary animals of the deuterostome group, we can go back in time to unveil aspects of the long-lost ancestor of this diverse group of animals.

Acorn worms are marine creatures that live on the ocean floor and feed by filtering a steady flow of sea water through slits in the region of their gut between mouth and esophagus. These slits are distantly related to the gills of fish, and represent a critical innovation in evolution not shared with animals like flies or earthworms. Since acorn worms occupy such a critical evolutionary position relative to humans the researchers sequenced two distantly related acorn worm species, Ptychodera flava, collected in Hawaii, and Saccoglossus kowalevskii, from the Atlantic Ocean. "Their genomes are necessary to fill the gap in our understanding of the genes shared by the common ancestor of all deuterostomes," explains Dr Oleg Simakov, lead author of this study.

Indeed, beyond sequencing these two organisms, the team was also interested in identifying ancient gene families that were already present in the deuterostome ancestor. The team compared the genomes of the two acorn worms with the genomes of 32 diverse animals and found that about 8,600 families of genes are homologous, that is, evolutionarily-related, across all deuterostomes and so are confidently inferred to have been present also in the genome of their deuterostome ancestor. Human arms, birds' wings, cats' paws and the whales' flippers are classical examples of homology, because they all derive from the limbs of a common ancestor. As with anatomical structures, genes homology is defined in terms of shared ancestry. Because of later gene duplications and other processes, these 8,600 homologous genes correspond to at least 14,000 genes, or approximately 70%, of the current human genome.

The study also identified clusters of genes that are close together in acorn worm genomes and in the genomes of humans and other vertebrates. The ancient proximity of these gene clusters, preserved over half a billion years, suggests that the genes may function as a unit. One gene cluster connected with the development of the pharynx in vertebrates and acorn worms is particularly interesting. It is shared by all deuterostomes, but not present in non-deuterostome animals such as insects, octopuses, earthworms and flatworms. The pharynx of acorn worms and other animals functions to filter food and to guide it to the digestive system. In humans, this cluster is active in the formation of the thyroid glands and the pharynx. Scientists suggest there is a connection between the function of the modern thyroid and the filter feeding mechanism of acorn worms. This pharyngeal gene cluster contains six genes ordered in a common pattern in all deuterostomes and includes the genes for four proteins that are critical transcriptional regulators that control activation of numerous other genes. Genes ordered in the same way and located next to each other in the chromosomal DNA are linked and transferred together from one generation to the next. Interestingly, not only the DNA that codes for these transcription factor genes is shared among the deuterostomes, but also some of the DNA pieces that are used as binding sites for the transcription factors are conserved among these animals.

"Our analysis of the acorn worm genomes provides a glimpse into our Cambrian ancestors' complexity and supplies support for the ancient link between the pharyngeal development and the filter feeding life style that ultimately contributed to our evolution," explains Dr Simakov.

Recently, the OIST team also sequenced the genomes of the octopus and the coral Porites australiensis. 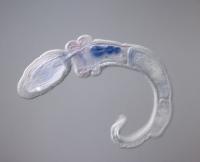 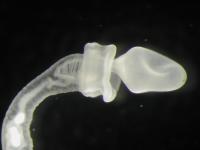