PHILADELPHIA -- Malaria parasites, although widespread among wild chimpanzees and gorillas, have not been detected in bonobos, a chimp cousin. Reasoning that previous studies may have missed infected bonobo populations, a team led by Beatrice Hahn, MD, a professor of Microbiology in the Perelman School of Medicine at the University of Pennsylvania, conducted a more extensive survey, increasing both the number and places they sampled wild bonobo populations. Although they saw evidence of a new malaria species in bonobos, it was limited to one small area of their range. The team published their findings in Nature Communications this week.

Hahn's lab studies ape relatives of human pathogens such as HIV and malaria to gain a greater insight into the microbes that cause these diseases in humans. African non-human primates are highly endangered and require non-invasive sampling methods to gain insight into their health. Hahn's team has perfected a sensitive assay that allows them to obtain genetic information of malaria parasites from ape fecal matter gathered from the forest floor.

"Not finding any evidence of malaria in wild bonobos just didn't make sense, given that captive bonobos are susceptible to this infection," Hahn said. "We look for biological loopholes to potentially exploit the life history of these pathogens to better understand how they cross over to humans."

According to the World Malaria Report, there were 214 million cases of malaria globally in 2015 and 438,000 deaths from the disease - down 37 and 60 percent, respectively, since 2000. Still, more work needs to be done to combat the parasite, especially since the barriers that prevent cross-species transmission are not well understood.

Hahn's team found that bonobos are, in fact, susceptible to a wide variety of Plasmodium malaria parasites, including a previously unknown Laverania species that is specific to bonobos. (Laverania parasites are close relatives of the human malaria parasite P. falciparum.) Wild bonobos are found in the forests of central Africa, south of the Congo River in the Democratic Republic of Congo (DRC). However, natural infection was only detected in the eastern-most part of the bonobo range.

"It seems likely that these parasites co-evolved with African apes, suggesting that the ancestors of bonobos were infected, and implying that most wild-living communities of bonobos have somehow lost their malaria parasites," said coauthor Paul Sharp, PhD, an evolutionary biologist from the University of Edinburgh.

The researchers tested 1,556 fecal samples from 11 field sites and identified a high prevalence of Laverania infections in an area called Tshuapa-Lomami-Lualaba (TL2), a remote region in the eastern DRC.

Until recently, there were six known ape Laverania species that exhibited strict host specificity (association with a single host species) in wild populations - three in chimpanzees and three in western gorillas. In 2010, Hahn and colleagues discovered that gorillas were the origin of the human malaria parasite Plasmodium falciparum, the most prevalent and lethal of the malaria parasites that infect people.

One surprising finding from the current study was that TL2 bonobos harbor P. gaboni, which was previously only found in chimpanzees, as well as a new Laverania species, termed P. lomamiensis, in recognition of the recently established Lomami National Park. The team tried to narrow down the reasons for the absence of Plasmodium from most bonobo field sites. However, neither parasite seasonality nor bonobo population structure could explain what they observed.

"We have yet to identify the causes," said co-first author Scott Sherrill-Mix, PhD, a Hahn lab postdoctoral fellow. "We looked at what plants bonobos eat and what types of bacteria make up their gut microbiome, but these could not explain the absence of Plasmodium from most of the bonobo sites. From this, we suspect that factors that influence parasite transmission are involved."

As scientists consider how malaria can be eliminated from the human population, Hahn notes that it is important to understand more about these ape parasites, what factors affect their distribution and host-specificity, and whether there are circumstances under which any of them could again jump into humans. Hahn knows of what she speaks. In 2006, her lab and collaborators confirmed that the virus that is responsible for the AIDS pandemic in humans is of chimpanzee origin. 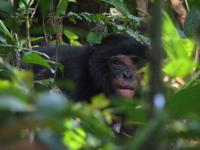