The ecological consequences of an environmental disaster can extend further than one may imagine as effects propagate through interconnected food webs. Most recently, researchers in the US have found evidence suggesting that oil from the Deepwater Horizon (DWH) spillage has been incorporated into birds living on land.

"At first, you may not imagine that a terrestrial bird would be impacted by an oil spill in the ocean, but in nature boundaries are often blurry," said team member Andrea Bonisoli Alquati -- who was affiliated to Louisiana State University at the time of the study and is now based at California State Polytechnic University, Pomona. "As a result, contaminants that are supposed to stay in aquatic environments can make it 'onto' land."

Reporting their work in the open-access journal Environmental Research Letters, the scientists used carbon dating methods to look for signs of oil in feathers and gut contents of sea sparrows found in marsh areas affected by the DWH spill. As a control, the team also repeated the measurements on the same species of bird collected in sites that were untouched by the oil.

"The two tissues provide information over different time-scales, with feathers integrating longer periods of exposure than stomach contents, which give a more recent snapshot of events," explained Bonisoli Alquati.

Adult and juvenile sea sparrows both feed on a variety of prey, including terrestrial as well as marine invertebrates -- making the birds a sensitive marker of contamination through a number of potential routes.

Examining their data, the researchers found that the radiocarbon content was lower in the feathers as well as in the stomach contents of birds from oiled sites, compared with sparrows found in the control plots. Taking all of the observations into account, the group finds that the result is consistent with the incorporation of spilled oil into birds living in habitats affected by the disaster.

To confirm the proximity and type of oil, the researchers conducted oil source fingerprinting on coastal sediments collected in nearby locations.

In their analysis, the group used pattern recognition and retention times of specific hopane, sterane, and triaromatic steroid cyclic biomarkers to determine eleven quantitative diagnostic indices (ratios) between target samples and a MC252 reference standard (the oil spilled at DWH).

To assess the above and related hypotheses in more detail, the team recommends future studies involving larger samples of birds from a wider area.

The research was made possible by a grant from The Gulf of Mexico Research Initiative. 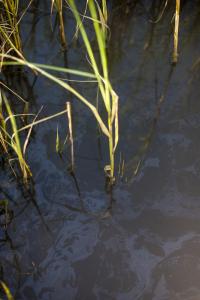 Oil Residues on the Surface of the Water in the Salt Marshes of Barataria Bay, La.