Analysis of ancient DNA of a mysterious extinct monkey named Xenothrix - which displays bizarre body characteristics very different to any living monkey - has revealed that it was in fact most closely related to South America's titi monkeys (Callicebinae). Having made their way overwater to Jamaica, probably on floating vegetation, their bones reveal they subsequently underwent remarkable evolutionary change.

The research published today in Proceedings of the National Academy of Sciences (12 November 2018) and carried out by a team of experts from international conservation charity ZSL (Zoological Society of London), London's Natural History Museum (NHM), and the American Museum of Natural History in New York, also reveals that monkeys must have colonised the Caribbean islands more than once. The study reports an incredible discovery of how the unusual ecology of islands can dramatically influence animal evolution.

Xenothrix, unlike any other monkey in the world, was a slow-moving tree-dweller with relatively few teeth, and leg bones somewhat like a rodent's. Its unusual appearance has made it difficult for scientists to work out what it was related to and how it evolved. However, the scientific team have successfully extracted the first ever ancient DNA from an extinct Caribbean primate - uncovered from bones excavated in a Jamaican cave and providing important new evolutionary insights.

Professor Samuel Turvey from ZSL, a co-author on the paper, said: "This new understanding of the evolutionary history of Xenothrix shows that evolution can take unexpected paths when animals colonise islands and are exposed to new environments. However, the extinction of Xenothrix, which evolved on an island without any native mammal predators, highlights the great vulnerability of unique island biodiversity in the face of human impacts".

Professor Ian Barnes, whom runs the NHM's ancient DNA lab, and co-author said: "Recovering DNA from the bones of extinct animals has become increasingly commonplace in the last few years. However, it's still difficult with tropical specimens, where the temperature and humidity destroy DNA very quickly. I'm delighted that we've been able to extract DNA from these samples and resolve the complex history of the primates of the Caribbean."

It is likely that Xenothrix's ancestors colonised Jamaica from South America around 11 million years ago, probably after being stranded on natural rafts of vegetation that were washed out of the mouths of large South American rivers. Many other animals, such as large rodents called hutias (Capromyidae) that still survive on some Caribbean islands today, probably colonised the region in the same way.

Ross MacPhee of the American Museum of Natural History's Mammalogy Department, a co-author of the study, said: "Ancient DNA indicates that the Jamaican monkey is really just a titi monkey with some unusual morphological features, not a wholly distinct branch of New World monkey. Evolution can act in unexpected ways in island environments, producing miniature elephants, gigantic birds, and sloth-like primates. Such examples put a very different spin on the old cliché that 'anatomy is destiny.'"

What Xenothrix may have looked like has been greatly debated, with suggestions that it looked like a kinkajou (Potos) or a night monkey (Aotus). Living titi monkeys are small tree-dwelling monkeys found across tropical South America, with long soft red, brown, grey or black fur. They are active during the day, extremely territorial and vocal, and live up to 12 years in the wild, with the father often caring for the young.

Though the Galapagos Islands are famous for inspiring Charles Darwin's theory of evolution, the islands of the Caribbean have also been home to some of the most unusual and mysterious species to have ever evolved. However, the Caribbean has also experienced the world's highest rate of mammal extinction since the end of the last ice age glaciation, likely caused by hunting and habitat loss by humans, and predation by invasive mammals brought by early settlers.

The Natural History Museum exists to inspire a love of the natural world and unlock answers to the big issues facing humanity and the planet. It is a world-leading science research centre, and through its unique collection and unrivalled expertise it is tackling issues such as food security, eradicating diseases and managing resource scarcity. The Natural History Museum is the most visited natural history museum in Europe and the top science attraction in the UK; we welcome more than 4.5 million visitors each year and our website receives over 500,000 unique visitors a month. People come from around the world to enjoy our galleries and events and engage both in-person and online with our science and learning activities through innovative programmes such as citizen science and family festivals. http://www.nhm.ac.uk

The American Museum of Natural History

Founded in 1869, is one of the world's preeminent scientific, educational, and cultural institutions. The Museum encompasses 45 permanent exhibition halls, including those in the Rose Center for Earth and Space and the Hayden Planetarium, as well as galleries for temporary exhibitions. It is home to the Theodore Roosevelt Memorial, New York State's official memorial to its 33rd governor and the nation's 26th president, and a tribute to Roosevelt's enduring legacy of conservation. The Museum's five active research divisions and three cross-disciplinary centers support approximately 200 scientists, whose work draws on a world-class permanent collection of more than 34 million specimens and artifacts, as well as on specialized collections for frozen tissue and genomic and astrophysical data and on one of the largest natural history libraries in the world. Through its Richard Gilder Graduate School, it is the only American museum authorized to grant the Ph.D. degree and also to grant the Master of Arts in Teaching degree. Annual visitation has grown to approximately 5 million, and the Museum's exhibitions and Space Shows are seen by millions more in venues on six continents. The Museum's website, mobile apps, and massive open online courses (MOOCs) extend its scientific research and collections, exhibitions, and educational programs to additional audiences around the globe. Visit amnh.org for more information. 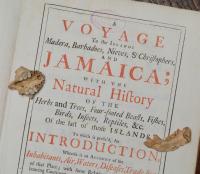 Skull of <Em>Xenothrix</em> against Important Book