NASA-NOAA's Suomi NPP satellite analyzed the temperatures in Post-tropical cyclone Nate's cloud tops as the storm moved over the Ohio Valley. Satellite imagery showed the storm was bringing rainfall from the northeastern U.S., to the Mid-Atlantic and south through the Appalachian Mountains.

On Oct. 9 at 2:54 a.m. EDT (0654 UTC) the VIIRS instrument aboard NASA-NOAA's Suomi NPP satellite captured a thermal image of cloud top temperatures from the remnants of Nate's cloud tops as it brought rain to the Mid-Atlantic and New England. Coldest cloud top temperatures were seen in storms over the Mid-Atlantic States down the chain of the Appalachian Mountains and back toward the Florida panhandle.

At 5 a.m. EDT (0900 UTC) on Monday, Oct, 9 the center of post-tropical cyclone Nate was located near 40.7 degrees north latitude and 81.7 degrees west longitude. That puts the center of circulation about 20 miles (35 km) southwest of Akron, Ohio.

NOAA's Weather Prediction Center (WPC) has taken over forecasting for the storm since Nate has become a post-tropical cyclone. WPC said "Doppler radar and satellite imagery indicated that the precipitation shield associated with Nate is on the northern and eastern side of the circulation. Moderate to heavy rainfall is occurring in the central Appalachians and Mid-Atlantic, with rain showers farther south into the Carolinas.

Farther north, tropical moisture is interacting with a frontal boundary stretching from the Ohio Valley through the northern Mid-Atlantic and northeast, leading to moderate to heavy rainfall for those areas and the lower Great Lakes. Nate is expected to continue tracking northeastward, moving through the Ohio Valley and into the Lower Great Lakes during the day on Monday." 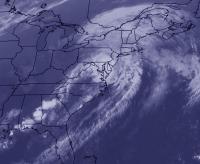