HOUSTON - (June 1, 2015) - The remains of tiny creatures found deep inside a mountaintop glacier in Peru are clues to the local landscape more than a millennium ago, according to a new study by Rice University, the University of Nebraska-Lincoln and Ohio State University.

The unexpected discovery of diatoms, a type of algae, in ice cores pulled from the Quelccaya Summit Dome Glacier demonstrate that freshwater lakes or wetlands that currently exist at high elevations on or near the mountain were also there in earlier times. The abundant organisms would likely have been transported in air currents to the glacier, where they were deposited on its surface, dead or alive, and ultimately became frozen within the glacial ice and persisted there for hundreds of years.

The study is the first to show the presence of diatoms in glacial ice from tropical regions. The diatoms offer useful information about conditions in and around the Andes when they were deposited on the ice.

The paper is the result of a unique collaboration among Rice chemists Ed Billups and Bruce Brinson, Ohio State climatologist Lonnie Thompson and lead author Sherilyn Fritz, a geoscientist at Nebraska. It appears this week in Arctic, Antarctic, and Alpine Research, a journal published by the University of Colorado-Boulder.

Of the four scientists, Billups, Brinson and even Thompson had something in common with the focus of their study: They were all, figuratively, fish out of water.

"I was the lucky latecomer to the group," said Fritz, who studies diatoms from cores she and her students drill from South American lakebeds. "It's only because Bruce was so observant and curious and did such a nice job on documenting the diatoms that it happened at all."

Over a long and storied career, Thompson has collected ice cores from many of the world's hard-to-reach locations, including Quelccaya in 2003. The cores contain a climate record that spans millennia, but Thompson's ability to pull hard data from his samples was complicated by the sheer number he had preserved.

Thompson said the first record of diatoms in tropical glaciers "points to the potential of these archives for investigating how not just diatoms but other life forms such as ancient microbes survived, thrived and evolved under extreme conditions and under very different climatic regimes."

The collaboration began when Thompson visited Rice for a conference and struck up a conversation with Billups, with whom he shares West Virginia roots.

"We got to talking," said Billups of their first encounter. "He knew we were working on carbon materials and said, 'You know, sometimes my ice is black, and I think that's carbon.'" Billups, whose wide-ranging research includes the study of all forms of carbon, suspected wind currents carried fullerenes from forest fires to the mountaintop and offered to have a look.

Thompson sent ice core filtrates in silica filter paper that preserved the contents of water from three layers corresponding to the years 1161 to 1176, 807 to 837 and 460 to 511 A.D. (The earliest samples tested for the study were from about 540 feet below the surface of the 18,000-foot mountain.) "When I looked at the samples, I thought, 'Whatever are we going to do with these?'" Billups recalled.

"We realized they weren't appropriate for searching for fullerenes," said Brinson, a Rice research scientist.

Brinson looked at the samples through a Rice electron microscope and quickly recognized their significance. Rather than fullerenes, they contained what the paper described as "a serendipitous byproduct": an abundance of diatoms, the study of which is generally well outside the realm of either chemists or glaciologists.

"When we saw the first diatom and realized it possessed periodic nanoscale structure, we knew we were documenting irreplaceable snapshots in archeological time and space," Brinson said.

"Thompson was very excited about this," Billups said. "Diatoms are found in Arctic and Antarctic ice, but he said nobody's ever found them in equatorial glaciers."

Brinson hit the books and identified many of the diatoms, which ranged in size from a few to 70 microns in length. "I don't have a biological background, but I knew they were unique," he said. He also realized the team needed a specialist.

Thompson, who knew of Fritz's work in South America, suggested they enlist her.

"There are diatoms in dust that is transported globally, and people have found them in glaciers in Antarctica and Greenland, so my first thought was they'd be like those," Fritz said. "But these are beautifully preserved, and most of the ecology we know about indicates they're not from global diatom dust sources."

Fritz said the diatoms' excellent condition suggested they hadn't traveled far. "Most but not all of them are species you would find in very dilute freshwater, either lakes or wetlands, and there are lots of those in the tropical Andes at varied elevations," she said. The presence of Volvox, green algae found in the two older samples, confirmed the diatoms' freshwater source.

The study has Fritz thinking about gathering diatoms from lakes near the ice cap to see how diatom populations have changed over the centuries. "I've contemplated doing some more sampling, just because it's an interesting question," she said. She does plan to have her students take a closer look at the original samples, which Brinson sent her, "to do some quantitative counts, just to get a better sense of the relative abundance of things."

The researchers wrote that continuing study of diatoms in relation to other materials found in the ice core record could provide valuable information about local or even global environmental change.

"I'm convinced there's no end to what you can find in these glaciers," Billups said.

"One thing is clear," Thompson said. "The greatest scientific progress going forward will be made with increased collaboration among many different disciplines. Unfortunately, these valuable ice archives of our past are rapidly disappearing under the present climate conditions."

The Welch Foundation, the Byrd Polar Research Center, the Shared Equipment Authority at Rice and the National Science Foundation supported the research.

This news release can be found online at http://news.rice.edu/2015/06/01/algae-found-deep-in-tropical-glacier/

Rice University's Ed Billups, left, a professor of chemistry, and Bruce Brinson, a research scientist, discovered diatoms, a type of algae, in ice cores pulled from a mountaintop glacier in Peru. The samples date back to the sixth century and are the first freshwater diatoms found in tropical glaciers. (Credit: Jeff Fitlow/Rice University)

Pennate (elongated) diatoms found in an ice core from the Quelccaya Summit Dome Glacier were among many samples identified by scientists at Rice University, the University of Nebraska-Lincoln and Ohio State University. They suspect the freshwater diatoms, a type of algae, were blown there from nearby high-elevation ponds as far back as the sixth century. (Credit: Bruce Brinson/Rice University)

The remains of an aulacoseira alpigena diatom found in ice from the Quelccaya Summit Dome Glacier. (Credit: Bruce Brinson/Rice University)

The remains of a pinnularia borealis diatom found in ice from the Quelccaya Summit Dome Glacier. (Credit: Bruce Brinson/Rice University) 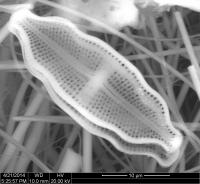