Tropical Cyclone Ita has been strengthening over the last two days and by April 10, Ita had become a major hurricane in the Coral Sea when NASA's Terra satellite passed overhead.

Ita's maximum sustained winds were near 115 knots/132 mph/213 kph on April 10 at 0900 UTV/5 a.m. EDT, making it a Category Four hurricane on the Saffir-Simpson scale. According to NOAA, the definition of a Category 4 storm affecting land is: "Catastrophic damage will occur: Well-built framed homes can sustain severe damage with loss of most of the roof structure and/or some exterior walls. Most trees will be snapped or uprooted and power poles downed. Fallen trees and power poles will isolate residential areas. Power outages will last weeks to possibly months. Most of the area will be uninhabitable for weeks or months."

The Moderate Resolution Imaging Spectroradiometer or MODIS instrument aboard NASA's Terra satellite captured a visible image of Tropical Cyclone Ita approaching Australia on April 10 at 00:25 UTC. The image showed a cloud-shrouded eye with a thick band of powerful thunderstorms around the center of circulation.

Ita is continuing to intensify as it moves west, south of Papua New Guinea. The Joint Typhoon Warning Center or JTWC expects the system to peak at 135 knots/155 mph/250 kph on approach to Queensland. JTWC also expects the system will veer sharply southeast on approach to the Australian coastline, and gradually weaken as it passes along the eastern coastline of Queensland. Ita will commence extra-tropical transitioning north of Brisbane. 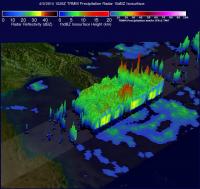 TRMM Flyby of Ita on April 9