The colors in a flower patch appear completely different to a bear, a honeybee, a butterfly and humans. The ability to see these colors is generated by specific properties of opsins - light-sensitive proteins in the retina of our eyes. The number of opsins expressed and the molecular structure of the receptor proteins determines the colors we see.

In a paper published February 9 in Proceedings of the National Academy of Sciences a team of researchers led by Harvard University develop a novel method to express long wavelength invertebrate opsin proteins in vitro and detail the molecular structure of redshift (long-wavelength) and blueshift (short-wavelength) in the opsins of the iconic tropical lycaenid butterfly, Eumaeus atala.

Aside from primates, relatively few animals living on land can perceive long-wavelength orange and red light. However, researchers have long known that certain butterflies have red light photoreceptors and show a preference to gather nectar at red flowers. The visual range for human eyes is typically 380nm to 700nm, but many insects can perceive shorter wavelengths of ultraviolet light below 400nm and they sometimes use these shorter wavelengths as a "private channel" of communication to signal to each other. Many flowers also take advantage of this ultraviolet reflectance to attract and signal rewards for pollinating insects such as bees, flies, and butterflies.

Given the importance of color-guided behaviors and the remarkable photoreceptor spectral diversity observed in insects, the dynamic opsin gene diversification found across lineages highlights their central role in adaptation. Insects are an ideal system in which to explore the dynamics of photoreceptor evolution; plenty of insect behavior is color-guided (e.g. mate-choice) and researchers know that insects vary remarkably in their spectral sensitivities. However, there lacked a set of tools that would allow researchers to probe the molecular details of insect vision.

To do this, researchers needed a tool to isolate and express a particular insect opsin gene in order to explore its structure and function when expressed in the membranes of cells in cell culture, a "heterologous expression system". Previously this method was used to analyze a few insect opsins sensitive to shorter wavelength, but opsins coding for longer wavelengths proved intractable leading researchers to speculate that these opsins were too unstable to be expressed in cell membranes.

'Because of the difficulty of expressing long-wavelength invertebrate opsins in vitro, our understanding of the molecular basis of functional shifts in opsin spectral sensitivities has been biased towards research primarily in vertebrates," said Liénard. The study by Liénard et al provides the tools needed to understand precisely how a single amino acid change in an opsin protein can alter what an insect sees and opens the ability to tease apart genotype-phenotype relationships underlying spectral tuning and visual adaptations in insects.

"Once we understand how genes making up the light-sensitive opsins in insect eyes function, we can start to retrace the evolutionary transitions involved in adaptive color vision across invertebrates," said Pierce.

Liénard made the critical breakthrough to express invertebrate opsin proteins in vitro optimizing each step - designing engineering cassettes, optimizing gene expression, and appropriately scaling up. Liénard's new system can be used to investigate opsins whose sensitivities range from the ultraviolet through to long wavelengths in the red, bordering on near infrared. And it can explore the behavior of these opsins without the interference of other eye components, such as filtering pigments, that often surround photoreceptor cells. "Once we understand how the genes making up the light-sensitive opsins in insect eyes function, we can start to retrace the evolutionary transitions involved in adaptive color vision across lineages," said Pierce.

The researchers characterized and purified all visual opsin genes in vitro for multiple species of butterflies. They then analyzed the photoreceptors where the opsin molecules are expressed across the eyes in the Atala hairstreak (Eumaeus atala). They looked for consistent patterns of base pair changes in different opsins, and then experimentally mutated the sequences of those opsins to test their evolutionary spectral tuning trajectories.

They discovered a new type of opsin absorbing red light and identified amino acids that are key to evolving green-shifted blue opsin functions. Lycaenid butterflies are famous for their rich diversity of wing coloration and behavioral ecology. Compared to the ancestral insect eye, which is thought to have been equipped with only one blue and one green receptor, these butterflies are able to maintain reliable color vision both across blue-green and green-red ranges of the light spectrum owing to the adaptive evolution of new opsin functions. Coordinated spectral shifts in green and red opsins underlie the genetic basis of red color vision in these butterflies.

The study also surprisingly showed that insects, which rely on a different subclass of opsin G-protein coupled receptors compared to vertebrates, nevertheless change blue opsin absorption by convergently shifting some of the same key amino acid residues in the protein binding pocket as short wavelength opsins of vertebrates. "But we also identified new tuning sites," said Liénard, "and the question now is whether the chromophore-binding sites are specific to this butterfly species, or whether they occurred recurrently as a signature of convergent adaptive evolution across insects."

"Color vision is driven by neural comparison among photoreceptors that have different spectral sensitivities," said Bernard. "But studying living eyes is a tedious task and obtaining a sufficient number of living individuals to make the measurements can also be a limiting factor."

Liénard, now a researcher at Lund University in Sweden, agreed, "This is why reconciling physiology and functional heterologous expression opens up new avenues in the field, especially since all invertebrate groups share the same opsin subclass. We hope this assay will 'deorphanize' functional studies of invertebrate opsins."

"Ultimately, this opens up the opportunity to better understand the structure-function relationships of light sensitive receptors," said Pierce, "and most importantly, how genotypic variation can translate into functional phenotypes, which is a cornerstone of evolutionary biology."

Color is in the eye of the beholder 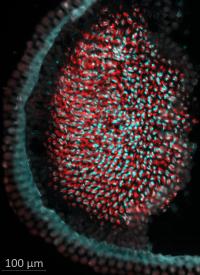