Ammonoids, ancestors of today's octopus, squid and cuttlefish, bobbed and jetted their way through the oceans for around 340 million years beginning long before the age of the dinosaurs. If you look at the fossil shells of ammonoids over the course of that 340 million years, you'll notice something striking--as time goes on, the wavy lines inside the shell become more and more complex, eventually becoming frilled almost like the edges of kale leaves. 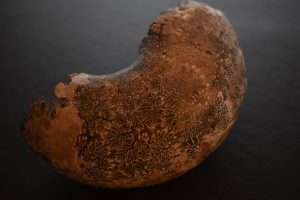 These wavy lines are called sutures, and they reflect the complexity of the edges of septa, or the walls that separated the chambers in the ammonoids' shells. Researchers previously focused on the roles of these complex structures in resisting pressure on the shell, but University of Utah researchers provide evidence for a different hypothesis. Complex sutures, they found, retained more liquid through surface tension, possibly helping the ammonoids fine-tune their buoyancy. Their results are published in Scientific Reports.

Due to an unfortunate lack of living ammonoids, the researchers had to turn to another method to understand the function of shell structure: 3-D printed models.

"These hypotheses couldn't be tested without being able to create incredibly accurate models of these intricate features," says David Peterman, lead author of the study and a postdoctoral scholar in the Department of Geology and Geophysics. "The 3-D printed models allow the fabrication of incredibly intricate chamber walls that have details comparable to the living animals." 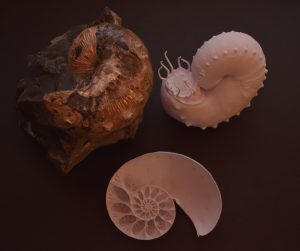 Although ammonoids are long extinct, we can look at their distant living relative, the chambered nautilus, to understand how their shells work.

If you look at a cross-section of a nautilus shell, you'll see that the shell is divided into chambers, each one separated by cup-shaped divider walls--septa. The suture lines are the intersections of these septa with the internal shell wall. "The earliest sutures were essentially straight lines in ammonoid ancestors like the nautiloids," Peterman says. And just as the sutures became more intricate and complex over evolutionary time in ammonoids, the septa developed more complex and fractal-like edges. "Some species," he says, "had sutures so complex that there was hardly any free space where the septa meet the shell."

If ammonoids developed the complex sutures and septa as a result of evolution, they must confer some survival advantage, right? Most research on ammonoids has focused on the hypothesis that the complex septa gave the shell strength. "Mechanical functional interpretations generally concern stress resistance," Peterman says, "with more complex divider walls acting as buttresses."

But several studies, he says, have challenged that hypothesis. An alternative hypothesis is that the intricate surfaces of the septa could change their surface tension, allowing more water to stick and improving the refilling of the shell chambers with water. This matters because that's the mechanism the ammonoids likely used to control their buoyancy during growth, in response to weight changes, and perhaps for vertical movement.

Peterman, assistant professor Kathleen Ritterbush and colleagues set out to test that hypothesis. But first they'd need some septa. The chambers of fossilized ammonoids are typically filled with lithified mud or minerals, Peterman says, necessitating another approach.

3-D printing the past

Using virtual modelling, the researchers custom-designed example septal surfaces in various sizes and with varying levels of complexity. Virtual modeling, Peterman says, allowed for the fabrication of hypothetical surfaces as well. "For example," he says, "one of the most complex sutures out there, from the shell of Menuites oralensis, was iteratively smoothed to investigate differences in complexity while holding the relative chamber volume and shell shape constant." 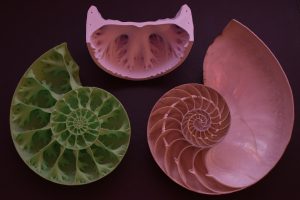 The team added to the models a coating of micro-dispersed oxidized cellulose to help the water stick to the surface. Nautilus shells have a similar coating. "While nautilids are distant relatives of ammonoids, in some ways they serve as our best analogues for the function of ammonoid shells," Peterman says.

The experimental process was relatively simple: weigh each model dry, dunk it in water, rotate it to drain the water held on by gravity, and then weigh it again to see how much water remained, held on by surface tension.

But the results showed clearly that the more complex structures held more water. And the more complex folds were especially effective at holding water in larger models. The results suggest, Peterman says, that complex septal surfaces may have helped with more precise and active buoyancy control. Ritterbush adds that they may also have enabled better balance, bigger size and external shapes that favor speed. 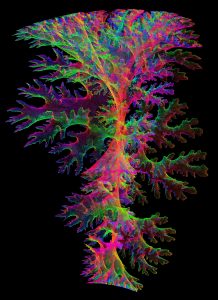 Virtual model of a single Menuites oralensis septum, used in the current study to create the 3-D-printed models.

Ammonoids hit the peak of suture complexity just before their extinction, along with the dinosaurs, at the end of the Cretaceous. Only the simply-sutured nautilids survived, but there were likely other factors at play aside from suture complexity that enabled their survival.

Their study lays the groundwork for this physiological function to be further explored, along with its relationship to ammonoid ecology. The development of advanced computing workflows and smart materials will eventually allow these enigmatic creatures to be "resurrected"  with functioning models.

"While we won't be able to revive these animals like the dinosaurs in Jurassic Park," Peterman says, "computer simulations and experiments such as these are the closest we will get to bringing these ecologically significant cephalopods back to life." 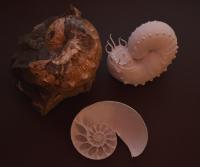