CORVALLIS, Ore. - Researchers from 20 of the world's leading oceanographic research centers today warned that the world's largest habitat - the deep ocean floor - may face starvation and sweeping ecological change by the year 2100.

Warming ocean temperatures, increased acidification and the spread of low-oxygen zones will drastically alter the biodiversity of the deep ocean floor from 200 to 6,000 meters below the surface. The impact of these ecosystems to society is just becoming appreciated, yet these environments and their role in the functioning of the planet may be altered by these sweeping impacts.

Results of the study, which was supported by the Foundation Total and other organizations, were published this week in the journal Elementa.

"Biodiversity in many of these areas is defined by the meager amount of food reaching the seafloor and over the next 80-plus years - in certain parts of the world - that amount of food will be cut in half," said Andrew Thurber, an Oregon State University marine ecologist and co-author on the study. "We likely will see a shift in dominance to smaller organisms. Some species will thrive, some will migrate to other areas, and many will die.

"Parts of the world will likely have more jellyfish and squid, for example, and fewer fish and cold water corals."

The study used the projections from 31 earth system models developed for the Intergovernmental Panel on Climate Change to predict how the temperature, amount of oxygen, acidity (pH) and food supply to the deep-sea floor will change by the year 2100. The authors found these models predict that deep ocean temperatures in the "abyssal" seafloor (3,000 to 6,000 meters deep) will increase as much as 0.5 to 1.0 degrees (Celsius) in the North Atlantic, Southern and Arctic oceans by 2100 compared to what they are now.

Temperatures in the "bathyal" depths (200 to 3,000 meters deep) will increase even more - parts of this deep-sea floor are predicted to see an increase of nearly 4 degrees (C) in the Pacific, Atlantic and Arctic oceans.

"While four degrees doesn't seem like much on land, that is a massive temperature change in these environments," Thurber said. "It is the equivalent of having summer for the first time in thousands to millions of years."

The over-arching lack of food will be exacerbated by warming temperatures, Thurber pointed out.

"The increase in temperature will increase the metabolism of organisms that live at the ocean floor, meaning they will require more food at a time when less is available."

Most of the deep sea already experiences a severe lack of food, but it is about to become a famine, according to Andrew Sweetman, a researcher at Heriot-Watt University in Edinburgh and lead author on the study.

"Abyssal ocean environments, which are over 3,000 meters deep, are some of the most food-deprived regions on the planet," Sweetman said. "These habitats currently rely on less carbon per meter-squared each year than is present in a single sugar cube. Large areas of the abyss will have this tiny amount of food halved and for a habitat that covers half the Earth, the impacts of this will be enormous."

The impacts on the deep ocean are unlikely to remain there, the researchers say. Warming ocean temperatures are expected to increase stratification in some areas yet increase upwelling in others. This can change the amount of nutrients and oxygen in the water that is brought back to the surface from the deep sea. This low-oxygen water can affect coastal communities, including commercial fishing industries, which harvest groundfish from the deep sea globally and especially in areas like the Pacific Coast of North America, Thurber said.

"A decade ago, we even saw low-oxygen water come shallow enough to kill vast numbers of Dungeness crabs," Thurber pointed out. "The die-off was massive."

"The North Atlantic in particular will be affected by warmer temperatures, acidification, a lack of food and lower oxygen," Thurber said. "Water in the region is soaking up the carbon from the atmosphere and then sending it on its path around the globe, so it likely will be the first to feel the brunt of the changes."

Thurber, who is a faculty member in Oregon State's College of Earth, Ocean, and Atmospheric Sciences, has previously published on the "services" or benefits provided by the deep ocean environments. The deep sea is important to many of the processes affecting the Earth's climate, including acting as a "sink" for greenhouse gases and helping to offset growing amounts of carbon dioxide emitted into the atmosphere.

These habitats are not only threatened by warm temperatures and increasing carbon dioxide; they increasingly are being used by fishing and explored by mining industries for extraction of mineral resources.

"If we look back in Earth's history, we can see that small changes to the deep ocean caused massive shifts in biodiversity," Thurber said. "These shifts were driven by those same impacts that our model predict are coming in the near future. We think of the deep ocean as incredibly stable and too vast to impact, but it doesn't take much of a deviation to create a radically altered environment. 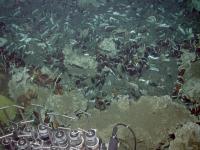