The new research looked at walking and running techniques in dogs with fore-limb or hind-limb amputations, using a treadmill and a set of high-tech infra-red cameras.

The scientists found different coping techniques or "compensation strategies", depending on which limb was missing, with absent fore-limbs proving more complicated.

The study, part of an EU project to improve robot efficiency and usability, is intended to help develop robots that can adapt in the event of an "injury".

The research is being presented at the Society for Experimental Biology Annual Meeting in Prague on Thursday 1st July 2010.

"Natural terrestrial locomotion is designed for an even number of limbs. After limb loss (e.g. by an injury) a reorganisation of the locomotive system is required", explains Martin Groß, who is carrying out the research at the University of Jena in Germany.

Adjusting to missing a fore-limb is more difficult for the dog to deal with than for a hind-limb, according to the researchers.

If a fore-limb is missing, the remaining limbs must undergo careful adaptation to co-ordinate with each other, a process known as "gait compensation".

With a hind-leg amputation, the scientists found that the fore-limbs continue to act as they would normally in a four-legged dog, showing little or no compensation strategy.

The scientists think the reason for the difference is due to the higher loading of the fore-limbs in comparison to the hind-limbs, because of the distribution of body weight.

During the study, dogs with fore-limb and hind-limb amputations ran on a treadmill for 2 minutes at a time, which was synchronised to a set of 10 high-speed infrared cameras.

Reflective markers positioned on the skin allowed the scientists to follow the movement of separate parts of the body through time, tracing out a trajectory. They then made complex comparisons of the characteristics of movement, known as kinematics, between dogs with different limbs missing and also with the "normal" movement of four-legged dogs.

This research is currently ongoing and the scientists hope to make considerable further measurements to consolidate their findings so far.

To develop a more comprehensive understanding of locomotive activity, future work under the EU Locomorph project will examine voluntary and involuntary changes to body movement in a wide range of different animals including humans. 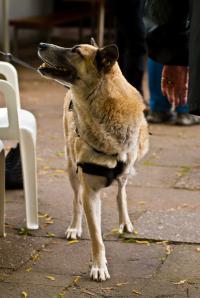