NASA looked at the rainfall rates within Tropical Storm Gert as it continued to strengthen and found the most intense rainfall on the tropical cyclone's eastern side. Just over 12 hours later, Gert would strengthen into a hurricane. As Gert has strengthened, the storm began generating dangerous surf along the U.S. East coast.

The Global Precipitation Measurement mission or GPM core observatory satellite passed above tropical storm Gert on August 14, 2017 at 9:36 a.m. EDT (1336 UTC) when winds had reached about 57.5 mph (50 knots). Data collected by GPM's Microwave Imager (GMI) and Dual-Frequency Precipitation Radar (DPR) instruments were used to show the coverage and the intensity of rainfall around Tropical Storm Gert. The area covered by GPM's radar swath revealed that the most intense rainfall, measuring greater 3.5 inches (90 mm) per hour, was located in bands of rain on the eastern side of the storm.

At NASA's Goddard Space Flight Center in Greenbelt, Maryland, GPM's Radar (DPR Ku Band) data was used to create a 3-D cross-section view through Gert. This examination of the storm's 3-D precipitation structure showed that the tallest thunderstorms were located in an intense band of rain east of Gert's center. The tall thunderstorms in that band were shown by DPR to reach altitudes above 9.4 miles (15.2 km). GPM is a joint mission between NASA and the Japan Aerospace Exploration Agency, JAXA.

On Aug. 14 at 1:18 p.m. EDT (17:18 UTC) NASA-NOAA's Suomi NPP satellite captured a visible image of Tropical Storm Gert, located off the coast of the southeastern U.S. The image showed that the bulk of clouds were still on the eastern side of the storm, but powerful thunderstorms surrounded the low-level center of circulation. A thick band of thunderstorms also wrapped into the center from the south.

Gert was moving toward the north near 12 mph (19 km/h). A turn toward the northeast with an increase in forward speed is expected later today. Maximum sustained winds remained near 75 mph (120 kph) with higher gusts. Gert has the opportunity to gather some strength later today or Wednesday. The estimated minimum central pressure is 986 millibars.

The National Hurricane Center noted that as Gert has increased in strength, ocean swells generated by Gert will spread northward along the east coast of the United States from North Carolina northward to Long Island during the next couple of days. Swells are also expected to affect Bermuda during the next couple of days. These swells are likely to cause life-threatening surf and rip current conditions.

Gert is expected to travel toward the northeast over the open waters of the northern Atlantic Ocean and dissipate by Saturday August 19, 2017.

For updated forecasts on Gert, visit the NHC website: http://www.nhc.noaa.gov. 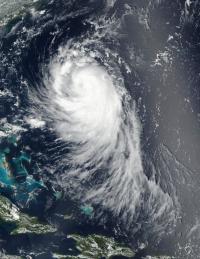 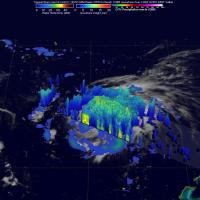