When falling in love, humans often pay attention to looks. Many non-human animals also choose a sexual partner based on appearance. Male birds may sport flashy feathers to attract females, lionesses prefer lions with thicker manes and colorful male guppies with large spots attract the most females. But bats are active in the dark. How do they attract mates? Mariana Muñoz-Romo, a senior Latin American postdoctoral fellow at the Smithsonian Tropical Research Institute (STRI) and National Geographic explorer, pioneers research to understand the role of odors in bat mating behavior.

"Aside from their genitalia, most male and female bat species look identical at first glance. However, a detailed examination during mating season reveals odor-producing glands or structures that are only present in male bats. Long interested in this understudied sexual difference, and working with long-nosed bats, Leptonycteris curasoae, in Venezuela, Muñoz-Romo discovered that males exhibit an odorous dorsal patch in the mating season consisting of a mixture of saliva, feces, urine and/or semen that seems to attract reproductive females.

Later in Panama, Muñoz-Romo investigated the "perfumes" from smelly crusts that male fringe-lipped bats, Trachops cirrhosus, meticulously apply to their forearms during mating season. These studies deepened her interest in odor and its role in bat mating systems, and her conviction that odor may be bats' secret weapon to choosing a mate in the dark."

Studies across a range of mammalian species show that just by smelling a potential mate, an individual can assess its sex, age, sexual receptiveness, health, social status, group membership and identity. This is a whole lot of personal information in one sniff, suggesting that odor may be a more important factor for mate choice and reproduction.

Alongside STRI staff scientist Rachel Page and renowned Boston University bat ecologist, Thomas H. Kunz, Muñoz-Romo combed through all published articles on the topic. Together, they found reports of odor-producing structures in 121 bat species from 15 different bat families. This represents nearly 10% of all known bat species and over 70% of bat families. Odors come from very different parts of bats' bodies, from their heads and mouths to their wings or genitalia. Not only are chemical signals potent and effective for communication in dark conditions, they also do not impede the bats' ability to fly.

"We believe that these key factors--nocturnality and powered flight--combined with scent-producing glands common across mammals, promoted the evolution of a great diversity of the odorous displaying structures we find in bats," Muñoz-Romo said.

Although researchers know very little about these structures so far, the new review of the subject opens up promising new avenues for bat research. There are potentially many more odor-related structures waiting to be discovered.

"Future investigations should consider the importance of the timing of odor production and sexual behavior, because most of these traits are displayed during a specific and usually short time of the year--the mating season," Muñoz-Romo said. "Answering new questions about the nature and development of the odorous traits, as well as understanding which traits female bats prefer, are key to understanding why differences between males and females evolved. We also want to understand the chemistry of bat perfumes--what compounds make them attractive."

In another recent publication, Muñoz-Romo, Page and colleagues suggest that the size of the odorous crusts found on the forearms of male T. cirrhosus allow females to evaluate potential mates during the time of year when they were fertile.

"While differences between males and females (sexual dimorphism) in bats have long been overlooked, new tools are giving us an ever-expanding window into their previously cryptic social lives," Page said. "The patterns revealed here sharpen the focus of investigations going forward, in particular highlighting the importance of seasonally present odor-producing glands and soft tissues. With so many bat species still to be studied, it will be extremely exciting to see what lies on the horizon. We only wish that our dear friend and colleague, Tom Kunz, whose insight inspired this work, had lived to see the publication of this review."

Members of the research team are affiliated with STRI, Universidad de Los Andes (Venezuela) and Boston University. The work supporting this review was funded by these three institutions at different points in time.

Is odor the secret to bats' sex appeal? 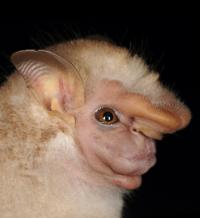