A research team consisting of members from Japan's National Institute of Polar Research, the Japan Agency for Marine-Earth Science and Technology (JAMSTEC), and other organizations conducted forecasting simulations of the cold waves that hit Japan and the North American East Coast in February 2015. Results showed that additional data collected that year through more frequent observation of meteorological conditions in the Arctic's upper atmosphere from both land-based research stations and the research vessel Lance plying winter Arctic waters improved the accuracy of cold wave forecasts.

In recent years, extreme winter weather events such as heavy snowfalls and severe winters have been occurring frequently in regions such as East Asia, North America and Europe. For example, Japan was experiencing a mild 2014/2015 winter when in February the winter pressure pattern strengthened. With it came record level snowfalls, to the Hokuriku region in particular. Memories are still fresh of the extreme record-setting -15°C cold wave that hit the North American East Coast a week later, which brought with it significant impacts on the region's people, transportation systems and economy.

To minimize the destructive effects of these extreme winter weather events, accurate forecasting of cold waves flowing in from the Arctic as early as possible is imperative. To that end, it is vastly preferable to have as much meteorological observation data as possible. However, as acquiring such data involves significant personnel and economic cost, its effectiveness needs to be ascertained.

An international research group led by Dr. Kazutoshi Sato and Dr. Jun Inoue of NIPR, and Dr. Akira Yamazaki of JAMSTEC, conducted experimental simulated forecasts of the 2015 cold waves that hit Japan on February 9 and the North American East Coast on February 16.

The collection of larger than usual amounts of Arctic winter weather data in 2015 was due to two reasons: the Norwegian research vessel Lance was in the Arctic Ocean observing and collecting upper atmosphere meteorological data, and the frequency of observation and data collection was increased at some of the land-based observation stations around the Arctic. Using JAMSTEC's supercomputer, the Earth Simulator, the research team recreated cold wave forecasts for two cases: 1) when there is more frequent observation and more data available than usual (as in 2015) and 2) a "normal" year with less data collection from land-based stations and no additional research resources available.

Results of the simulations clearly showed that the additional data collected by the Lance and more frequent collection at land-based stations significantly improved the accuracy of cold wave forecasts.

The additional data collected in 2015 allowed for a significantly more accurate understanding of the dynamics occurring in the center of the cold winter air masses that develop in the upper atmosphere above the Arctic Ocean (the polar vortex), and the initial conditions in the atmosphere from which extreme winter weather events arise. More precise assessment of the initial conditions preceding extreme weather events is indispensable in making accurate forecast calculations. 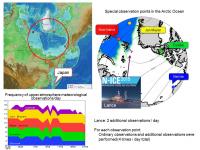 Figure 1: Map of the Arctic 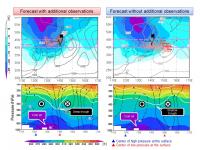