Combining experiment and theory, researchers from the Max Born Institute for Nonlinear Optics and Short Pulse Spectroscopy (MBI) and the Max Planck Institute of Microstructure Physics have disentangled how laser pulses can manipulate magnetization via ultrafast transfer of electrons between different atoms.

Few nanometer-thin films of magnetic materials are ideal test objects to study fundamental problems in magnetism. Furthermore, such thin magnetic films have important technological applications. For example, they are used in magnetic mass data storage devices, e.g., in the magnetic hard drives used in cloud data storage centers. While in current technology the magnetization in these thin films is manipulated via magnetic fields, it is also possible to influence the magnetization using laser pulses. When exposed to ultrashort light pulses of only a few tens of femtosecond duration (1 femtosecond = 1 millionth of one billionth of a second), it is observed that the magnetization below the laser spot changes. In simple systems, this change often corresponds to a simple decrease in the magnetization magnitude. In more complex material systems, however, the light pulse can also permanently reverse the magnetization. In such cases, one speaks of all-optical magnetization switching, with obvious potential for application. The remarkable speed of this switching process is not yet understood. For this reason, research groups around the world are investigating the microscopic processes underlying "femtomagnetism".

Researchers from the Max Born Institute in Berlin and the Max Planck Institute for Microstructure Physics in Halle, combining experimental and theoretical work, have now witnessed a new microscopic process "at work", which was predicted only recently. The process, called optical intersite spin transport (OISTR), can occur when suitable atoms of different types are adjacent in a solid. Under suitable conditions, a light pulse triggers a displacement of electrons from one atom to its neighbor. Importantly, this happens predominantly with electrons of a particular spin orientation and thus influences the local magnetization. This process takes place during optical excitation and does not depend on secondary mechanisms. It is, therefore, the fastest process imaginable leading to a light-induced change in magnetism.

An atom in a solid that is magnetized can be pictured as having separate reservoirs of spin-up and spin-down electrons, which are filled to a different extent. For a Cobalt (Co) and Platinum (Pt) atom which are neighbors of each other in a CoPt alloy, this is sketched in Figure 1. The difference in the number of spin-up and spin-down electrons (drawn in red and blue) determines the amount of magnetization of the atom. If the magnetization is reduced, the number of the two spin types has to equalize. A well-known process to level both reservoirs at one atom is a spin-flip, in which, for example, a spin-down electron turns into a spin-up electron - represented by a jump from the blue bucket into the red bucket in Figure 1. These spin-flips predominantly occur at heavy atoms like Pt, where the spin reacts particularly sensitive on the motion of the electron - physicists speak of a large spin-orbit coupling. The angular momentum emitted in this spin-flip process is absorbed by the entire array of atoms in the solid.

In the present study, published in the journal Nature Communications, the researchers have investigated two model systems, a pure Co layer and a CoPt alloy. The team monitored the absorption of ultrashort pulses of soft x-rays with controlled wavelength and polarization after a laser pulse excitation and compared their experimental findings to theoretical calculations as shown in Figure 2. In this way, the changes in the numbers of electrons with spin-up and spin-down triggered by the initial laser pulse could be studied separately for the Co and Pt atoms.

The comparison between the simple system containing exclusively Co atoms (left panels in Figure 2) and the alloy, containing both Co and Pt atoms (right panels) shows pronounced differences in the absorption behavior, which are independently predicted by the theoretical calculations. These differences come about as in the CoPt alloy an additional process can take place in which electrons are transferred between the different types of neighboring atoms.

Due to the laser pulse, electrons within the solid are transferred from the Pt atoms to the Co atoms. It turns out that these are preferentially spin-down electrons because many empty states for spin-down electrons are available at the receiving Co site. At the Co atom, the transferred electrons, thus, increase the level of the spin-down electrons (red in Figure 2), making it more similar to the spin-up reservoir and hence reducing the magnetic moment of the Co atom. This OISTR process between Pt and Co is accompanied by a leveling of the electron reservoirs locally at the Pt atoms via spin flips. This spin-flip happens efficiently at the heavy Pt atoms exhibiting large spin-orbit-coupling and only to a much lesser extent at the lighter Co atoms.

The detailed results of the study show that the ability to optically manipulate magnetization via optical intersite spin transport depends crucially on the available states for spin-up and spin-down electrons of the atoms involved. These states can be tailored by bringing the right types of atoms together in novel materials. The understanding of the microscopic mechanisms involved in the optical manipulation of the magnetization, thus, paves the road to a rational design of new functional magnetic materials, allowing for ultrafast control of magnetization via laser pulses. 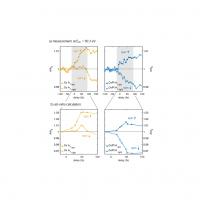