In daily life we remember faces and voices of several known individuals. Similarly, mammals have been shown to remember calls and faces of known individuals after a number of years. Markus Boeckle and Thomas Bugnyar from the Department of Cognitive Biology of the University of Vienna show in their recent article, published in Current Biology, that ravens differentiate individuals based on familiarity. Additionally, they discovered that ravens memorize relationship valence and affiliation.

So far it was unknown whether relationship valence can be remembered based on former positive or negative interactions. As response to calls of formerly known individuals ravens not only increase the number of calls but also change call characteristics dependent on whether they hear former "friends" or "foes". This suggests that ravens remember specific individuals at least for three years.

The ability to change call characteristics is especially interesting: In case they hear a "friendly" individual they respond with a "friendly" call, whereas when listening to a "foe", they exhibit lower frequencies and rougher characteristics, an effect already described for other animal species.

Ravens respond to calls from previously unknown individuals with even lower and rougher calls and thus try to increase the acoustic perceivable body-size – also in humans larger people have lower voices than smaller ones and angry humans rougher voices. While it was known that mammals change their voices based on the relationship they share with others, the researchers were now able to show for the first time that also birds change their calls according to relationship quality.

The duration of the memory is beyond the previously estimated ability for birds; the ability to remember relationship valence has been shown for the first time in animals.

Ravens remember relationships they had with others 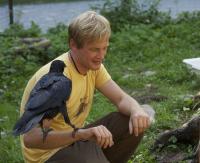