Scientists from The University of Washington have found evidence that ocean acidification caused by carbon emissions can prevent mussels attaching themselves to rocks and other substrates, making them easy targets for predators and threatening the mussel farming industry.

"A strong attachment is literally a mussel's lifeline" says Professor Emily Carrington, one of the lead researchers. Mussels attach themselves to hard surfaces so that they can filter plankton from seawater for food. They generally live in tidal zones, where the strong waves and currents protect them from predators such as crabs, fish and sea stars. But if a mussel falls off its perch, it sinks down into calmer waters where it is readily eaten.

Future conditions may make it more difficult for mussels to attach themselves out of harm's way. This is because the pH level appears to be critical during the attachment process, and our oceans are becoming more acidic from absorbing CO2 emissions from the atmosphere. "Our early laboratory studies showed mussels made weaker attachment threads when seawater pH dropped below 7.6" says Professor Carrington. These results could have severe implications for aquaculture. In mussel farms, the mussels attach themselves to ropes suspended in the water for 6-12 months while they grow to market size. Currently, weak attachments can cause up to 20% of the crop to fall off and be lost on the seafloor.

The researchers have shown that the change in pH specifically affects the adhesive plaque which cements the mussel to the underlying surface. "We investigated whether lowering seawater pH would affect the curing process of the attachment threads" says Professor Carrington. Threads made by mussels in seawater with a "normal" pH of 8 were then kept at either pH 8, 7 or 5 to cure for 12 days. Using a materials testing machine, the team found that threads cured at the lower pH values were 25% weaker than the controls. "We conclude that mussels rely on the high pH of seawater to cure their adhesive effectively and form strong attachments" says Professor Carrington. Furthermore, one mussel species Mytilus trossulus also made fewer and weaker threads when the temperature of the water was increased from to above 18 °C. In contrast, a closely related non-native species Mytilus galloprovincialis made more and stronger threads. This suggests warming oceans will increasingly favour the non-native species, allowing it to expand its distribution polewards and push out native species.

Although the global average ocean pH is only predicted to lower from 8.0 to 7.8 by the end of the century, this could still have a profound effect on mussel communities, says Professor Carrington. "Due to upwelling and local productivity, our seawater in Washington is already at a baseline of pH 7.8. Moreover, mussels live in highly dynamic coastal environments that routinely fluctuate up or down 0.5 pH units" she says. This means that mussels are already exposed at times to conditions that weaken attachment and these periods may be longer and more severe in the future.

Acid attack -- can mussels hang on for much longer? 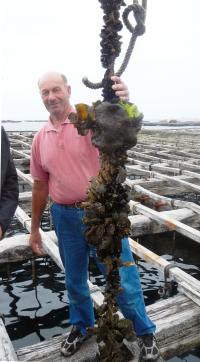