CHAMPAIGN, Ill. — When it comes to breaking down plant matter and converting it to energy, the cow has it all figured out. Its digestive system allows it to eat more than 150 pounds of plant matter every day. Now researchers report that they have found dozens of previously unknown microbial enzymes in the bovine rumen – the cow's primary grass-digestion chamber – that contribute to the breakdown of switchgrass, a renewable biofuel energy source.

The study, in the journal Science, tackles a major barrier to the development of more affordable and environmentally sustainable biofuels. Rather than relying on the fermentation of simple sugars in food crops such as corn, beets or sugar cane (which is environmentally costly and threatens the food supply) researchers are looking for better ways to convert the leaves and stems of grasses or woody plants to liquid fuel. These "second-generation" biofuels ideally will be "carbon neutral," absorbing as much carbon dioxide from the atmosphere as is emitted in their processing and use.

But breaking down and releasing the energy in the plant cell wall is no easy task.

"The problem with second-generation biofuels is the problem of unlocking the soluble fermentable sugars that are in the plant cell wall," said University of Illinois animal sciences professor Roderick Mackie, an author on the study whose research into the microbial life of the bovine rumen set the stage for the new approach. "The cow's been doing that for millions of years. And we want to examine the mechanisms that the cow uses to find enzymes for application in the biofuels industry."

In previous studies beginning in 2008, Mackie and Washington State University professor Matthias Hess (then a postdoctoral researcher at the U.S. Department of Energy Joint Genome Institute in California) used a decades-old technique for studying ruminant nutrition. They placed small, mesh bags containing either milled alfalfa or switchgrass through a cannula (a permanent, surgically installed portal) into the cow rumen and examined the microbes that adhered to each plant type after two or three days. Visual and chemical analyses showed that microbes in the rumen were efficiently breaking down both types of plant matter, with a different community of microbes attacking each plant type.

This and later experiments proved that the technique could help scientists find the microbes in the cow rumen that were most efficient at degrading a particular type of plant matter, said Mackie, who is a professor in the U. of I. Institute for Genomic Biology.

In the new study, the researchers focused on switchgrass, a promising biofuels crop. After incubating the switchgrass in the rumen for 72 hours, researchers conducted a genomic analysis of all of the microbes that adhered to switchgrass. This "metagenomic" approach, led by Edward Rubin, of the DOE Joint Genome Institute and the Lawrence Berkeley National Laboratory, analyzed all the genes in all the microbes present in a sample, rather than one at a time. This gave a more accurate picture of the processes in the rumen that make plant degradation possible, Mackie said.

"Bacteria are microbes," he said. "They don't live alone. They live in consortia, and they all contribute to the functioning and the services provided."

Using a variety of techniques, the researchers sequenced and analyzed the total DNA in the sample, a huge undertaking that allowed them to identify 27,755 potential "carbohydrate-active" genes. They cloned some of these genes into bacteria, and successfully produced 90 proteins of interest. They found that 57 percent of these proteins demonstrated enzymatic activity against cellulosic plant material.

The researchers also were able to assemble the genomes of 15 previously "uncultured" (never before grown in a lab) microbes, said Hess, who is first author on the new study. Several techniques, including sequencing the genomes of individual cells and comparing those to the assembled genomes, validated this approach, he said.

These results suggest that the bovine rumen is one of the best microbial habitats to explore for sources of plant-degrading enzymes, the researchers reported.

The research team also included scientists from the DOE Joint Genome Institute, the University of California at Berkeley and Illumina Inc. The BP-sponsored Energy Biosciences Institute funded the research carried out at Illinois.

The paper, "Metagenomic Discovery of Biomass-Degrading Genes and Genomes From Cow Rumen," is available from the U. of I. News Bureau.

Team looks to the cow rumen for better biofuels enzymes 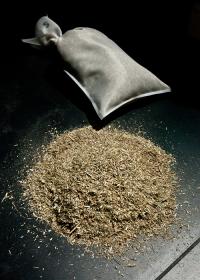 Switchgrass in the Bag