CHEOPS is a joint mission by the European Space Agency (ESA) and Switzerland, under the leadership of the University of Bern in collaboration with the University of Geneva (UNIGE). After almost three months of extensive testing, with part of it in the midst of the lockdown to contain the coronavirus, on Wednesday, March 25, 2020, ESA declared the CHEOPS space telescope ready for science. With this achievement, ESA has handed over the responsibility to operate CHEOPS to the mission consortium, which consists of scientists and engineers from approximately 30 institutions in 11 European countries.

Successful completion of the CHEOPS test phase despite the coronavirus crisis

The successful completion of the test phase took place in very challenging times, with essentially all the mission team being required to work from home towards the end of the phase. "The completion of the test phase was only possible with the full commitment of all the participants, and because the mission has an operational control system that is largely automated, allowing commands to be sent and data to be received from home," explains Willy Benz, Professor of Astrophysics at the University of Bern and Principal Investigator of the CHEOPS mission.

A team of scientists, engineers and technicians put CHEOPS through a period of extensive testing and calibration from the beginning of January until the end of March. "We were thrilled when we realized that all the systems worked as expected or even better than expected," explains CHEOPS Instrument Scientist Andrea Fortier from the Univerisity of Bern, who led the commissioning team of the consortium.

The team began by focusing on the evaluation of the photometric performance of the space telescope. CHEOPS has been conceptualized as a device of exceptional precision capable of detecting exoplanets the size of planet Earth. "The most critical test was in the precise measurement of the brightness of a star to a variance of 0.002% (20 parts-per-million)," explains Willy Benz. This precision is required so as to clearly recognize the dimming caused by the passage of an Earth-sized planet in front of a Sun-like star (an event known as a "transit", which can last several hours). CHEOPS was also required to demonstrate its ability to maintain this degree of precision for up to two days.

To verify this, the team focused on a star known as HD 88111. The star is located in the Hydra constellation, some 175 light years away from Earth, and it is not known to host planets. CHEOPS took an image of the star every 30 seconds for 47 consecutive hours (see Figure 1). Every image was carefully analyzed, initially using a specialized automatic software package, and subsequently by the team members, to determine in each image the brightness of the star as accurately as possible. The team had expected the brightness of the star to change during the period of observation due to a variety of effects, such as other stars in the field of view, the tiny jitter motion of the satellite, or the impact of cosmic ray hits on the detector.

The results of the 5,640 photos taken by CHEOPS over 47 hours are shown in Figure 2 as a "light curve". The curve depicts the change over time in the brightness measurements from all the images, showing a root-mean-square scatter of 0.0015% (15 parts-per-million). "The light curve measured by CHEOPS was pleasingly flat. The space telescope easily surpasses the requirement for being able to measure brightness to a precision of 0.002% (20 parts-per-million)," explains Christopher Broeg, Mission Manager for the CHEOPS mission at the University of Bern.

An exoplanet that would float

The team observed other stars, including some known to host planets (these are called exoplanets). CHEOPS focused on the planetary system HD 93396 which is in the Sextans constellation, some 320 light years away from Earth. This system consists of a giant exoplanet called KELT-11b, which was discovered in 2016 to orbit this star in 4.7 days. The star is almost three times the size of the sun.

The team chose this particular system because the star is so big that the planet takes a long time to pass in front of it: in fact, almost eight hours. "This gave CHEOPS the opportunity to demonstrate its ability to capture long transit events otherwise difficult to observe from the ground, as the 'astronomical' part of the night for ground-based astronomy usually takes less than eight hours," explains Didier Queloz, professor at the Astronomy Department of the Faculty of Science at the University of Geneva and spokesperson of the CHEOPS Science Team. The first transit light curve of CHEOPS is shown in Figure 3, where the dip due to the planet occurs approximately nine hours after the he beginning of the observation.

The transit of KELT-11b measured by CHEOPS enabled determining the size of the exoplanet. It has a diameter of 181,600 km, which CHEOPS is able to measure with an accuracy of 4'290 km. The diameter of the Earth, in comparison, is only approximately 12,700 km, while that of Jupiter - the biggest planet in our solar system - is 139,900 km. Exoplanet KELT-11b is therefore bigger than Jupiter, but its mass is five times lower, which means it has an extremely low density: "It would float on water in a big-enough swimming pool," says David Ehrenreich, CHEOPS Mission Scientist from the University of Geneva. The limited density is attributed to the close proximity of the planet to its star. Figure 4 shows a drawing of the first transit planet system to be successfully observed by CHEOPS.

Benz explains that the measurements by CHEOPS are five times more accurate than those from Earth. "That gives us a foretaste for what we can achieve with CHEOPS over the months and years to come," continues Benz. 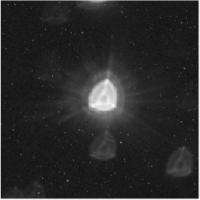 Image Taken by CHEOPS from a Star Known as HD 88111