Human civilization in the 21st century is largely sustained by modern chemical technologies. The raw materials used in the manufacturing of a wide range of products, from clothing to plastics and pharmaceuticals, are mainly produced through efficient catalytic conversion of cheap feedstock chemicals into value-added organic commodities. In many cases, the chemical reactions involving organic compounds take place through short-lived reaction intermediates, such as carbocations.

Carbocations are chemical species containing a positively charged carbon atom. In general, these molecules are highly reactive toward many chemical transformations, and they frequently occur in many key reactions that have revolutionized synthetic and physical organic chemistry. Carbocation intermediacy is known to be responsible for a wide range of fundamental reactions, such as substitution, elimination, and rearrangement. The utilization of these reactions has significantly expanded the repertoire of available retrosynthetic approaches in chemical synthesis. Due to its extensive influence in the field of organic chemistry, the 1994 Nobel Prize in chemistry was awarded in recognition of the advancement in carbocation chemistry.

However, the intrinsic instability of carbocation often becomes a major bottleneck in synthetic chemistry. The carbocations are short-lived intermediates in most reactions, and while their lifetimes can vary depending on the type of reaction, it is usually within a scale of a few nanoseconds, which are billionths of a second, or shorter. Therefore, it is extremely challenging to control its reactivity or perform spectroscopic observation. For these reasons, the catalytic accessibility of the carbocation-mediated reaction has been largely restricted, and it is also difficult to suppress the unwanted formation of other side products.

To address this problem, a team of researchers led by Prof. CHANG Sukbok at the Center for Catalytic Hydrocarbon Functionalizations within the Institute for Basic Science (IBS, South Korea) have developed a novel catalyst capable of accessing transient carbocation intermediates in order to achieve regiocontrolled elimination reaction. Using this new catalyst, they have succeeded in producing two types of ring-shaped molecules called γ- and β-lactams, which are highly sought after in synthetic, organic, and pharmaceutical chemistry.

Traditional catalysts are mostly limited to generating the carbocation intermediates and do not influence the regioselectivity of the reaction. Therefore, it is often required to add costly elimination pathways to remove undesirable products. IBS researchers challenged this issue by developing a multifaceted catalytic system. In 2018, they independently developed a novel iridium catalyst that converts hydrocarbons into versatile γ-lactams, a technological feat that was published in Science. This catalyst was further repurposed to directly engage in both generation and selective conversion of carbocation intermediates. The key to success is that the customized catalyst temporarily generates Ir-nitrenoid species, whose electrophilicity is high enough to access carbocation species and insert bonds into carbon-carbon double bonds.

In this study, a quantum chemistry simulation used dioxazolone as a model substrate to analyze the reaction mechanism in detail and find the optimal structure of potential catalysts. According to such computer predictions, they identified that a ligand in the catalyst can play a critical role of an internal base to selectively abstract one specific proton between two competing sites within a carbocation. Through further optimization, they tailored a new high-quality catalyst with unprecedented selectivity (>95%) for the desired allylamide products over enamides.

This customized catalyst was readily applicable for the preparation of γ-lactams and a more challenging process of producing β-lactams. γ-lactams have been recognized as a key structural motif in both natural and synthetic molecules, which include a number of drugs used in cancer therapy. On the other hand, β-lactam is one of the most important classes of antibiotic agents and pharmaceutical products, as exemplified by penicillin G and its derivatives.

In addition to its ability to control the regioselectivity, the use of the new catalyst further extends into asymmetric reactions. The catalyst also succeeded in synthesizing chiral compounds with excellent enantioselectivity of up to 98%. Enantioselective synthesis is extremely important in the pharmaceutical industry, as the same molecule with different chirality may have entirely different biological activity. For example, (R)-enantiomer of thalidomide provides therapeutic effects, while its (S)-enantiomer causes birth defects. As the separation process is expensive, many drugs are sold as racemic mixtures. Therefore, it is expected that this technology will find widespread applications in pharmaceutical chemistry to synthesize a wide class of clinical drugs while minimizing their side effects.

Professor Chang said, "The research was initiated by Dr. HONG Seung Youn who came up with this creative idea. He also actively led the theoretical investigation and experiments of this study. These findings have not only made new academic advances that opened a new avenue for accessing temporary carbocation intermediates, but also will provoke further developments with many intriguing applications." 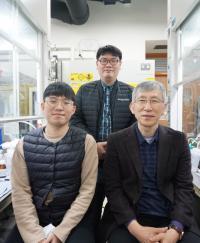