(Santa Barbara, Calif.) ––Thanks to the MESSENGER spacecraft, and a mission that took more than 10 years to complete, scientists now have a good picture of the solar system's innermost planet.

"Mercury is the last unexplored planet," said UC Santa Barbara physics professor emeritus Stanton Peale, who devised the procedure used for detecting whether or not Mercury had a liquid core. The way Mercury was formed, he said, may show some constraints on the formation of the solar system.

For one thing, Mercury's core is larger than expected –– almost 85 percent of the planetary radius. The Earth's core, in contrast, is just over half of the planet's radius. Additionally, Mercury appears to have a more complex core than Earth's –– a solid iron sulfide layer that is now part of the mantle, which encases a liquid core, which may float on a solid inner core.

"We didn't expect so much sulfur," he said, adding that there was almost no iron found on the surface of the planet. With no iron, the volcanic surface rocks are too light to have come from a mantle with the large average density derived for the internal structure. This led to the concept of a two-layer mantle –– with a light upper silicate layer, which could provide the low-density surface material –– over a dense iron sulfide layer.

In the larger picture, the presence of inordinately large amounts of sulfur on the surface indicates that Mercury's formation was not as orderly as some scientists had previously assumed, according to Peale. "Mercury is composed of material that had condensed over a wide range from the Sun," he said.

Other findings include a precise topographic model of the planet's northern hemisphere, which reveals a smaller spread in elevations compared to those of Mars or the Moon.

Additionally, radar-bright features at the poles located in areas of permanent shadow have been found to be consistent with a water-ice hypothesis; however the notion has yet to be tested further with MESSENGER's neutron spectrometer.

MESSENGER is already on the next phase of its investigations: an extended year-long mission that includes more comprehensive and more targeted measurements. 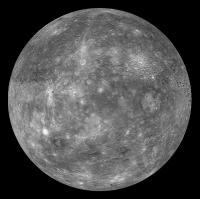