New research presents over 300 new analyses of bronze objects, raising the total number to 550 in 'the archaeological fingerprint project'. This is roughly two thirds of the entire metal inventory of the early Bronze Age in southern Scandinavia. For the first time, it was possible to map the trade networks for metals and to identify changes in the supply routes, coinciding with other socio-economic changes detectable in the rich metal-dependent societies of Bronze Age southern Scandinavia.

The magnificent Bronze Age in southern Scandinavia rose from copper traded from the British Isles and Slovakia 4000 years ago. 500 years later these established trade networks collapsed and fresh copper was then traded from the southern Alps, the so-called Italian Alps. This large-scale study could show that during the first 700 years of the Nordic Bronze Age the metal supplying networks and trade routes changed several times. These 700 years of establishment and change led to a highly specialised metalwork culture boasting beautiful artwork such as the Trundholm Sun wagon and spiral decorated belt plates branding high-ranking women; even depicted on today's Danish banknotes.

The study by H. Nørgaard, Moesgaard Museum and her colleagues H. Vandkilde from Aarhus University and E. Pernicka from the Curt-Engelhorn Centre in Mannheim built on the so far largest dataset of chemical and isotope data of ancient bronze artefacts. In total 550 objects were used to model the changes that took place: These changes correlate with major shifts in social organisation, settlements, housing, burial rites and long distance mobility.

"It is highly likely that both people and technologies arrived to Scandinavia and that Scandinavians travelled abroad to acquire copper by means of the Nordic amber, highly valued by European trading partners".

In your coverage please use this URL to provide access to the freely available article in PLOS ONE: https://journals.plos.org/plosone/article?id=10.1371/journal.pone.0252376 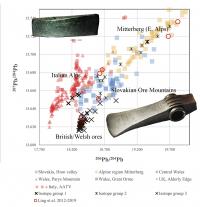