PITTSBURGH—A University of Pittsburgh researcher's endeavor to clear the name of ancient Carthage—a North African empire long accused of ritual baby killing—was selected by Archaeology magazine as one of the top 10 archaeological discoveries of 2010. The magazine is the world's largest general-interest publication for archaeology, with a readership of more than 750,000.

Jeffrey H. Schwartz, a professor of anthropology and of history and philosophy of science in Pitt's School of Arts and Sciences, is featured in the magazine's January/February 2011 edition for producing skeletal evidence that refutes claims from as early as the 3rd century BCE that the people of Carthage regularly sacrificed their youngest citizens. A team led by Schwartz reported in the Proceedings of the Library of Science (PLoS) ONE in February 2010 that burial urns thought to contain the remains of sacrificed infants actually contain the remains of all young children regardless of how they died. The team's examination of the remains revealed that most infants perished prenatally or very shortly after birth and were unlikely to have lived long enough to be sacrificed.

Archaeology included the project alongside such notable finds of 2010 as the decoding of the Neanderthal genome, the development of a nondestructive carbon-dating technique, and the discovery of a 3.6-million-year-old skeleton that proves early human ancestors walked upright. The top 10 feature is now available on the Archaeology Web site at www.archaeology.org and will be on newsstands Dec. 16.

"To be included on Archaeology's list is quite an honor when you consider the thousands of distinguished archaeologists around the world who work in the field year after year and spend a lifetime analyzing their finds," Schwartz said. "The task of selecting the 10 most significant finds from thousands of publications is no doubt difficult. To stand out from such a varied and illustrious crowd is a privilege."

Schwartz worked with Frank Houghton of the Veterans Research Foundation of Pittsburgh, Roberto Macchiarelli of the National Museum of Natural History in Paris, and Luca Bondioli of the National Museum of Prehistory and Ethnography in Rome to inspect the remains of children found in Tophets, burial sites peripheral to Carthaginian cemeteries for older children and adults. Tophets housed urns containing the cremated remains of young children and animals, which led to the theory that they were reserved for victims of sacrifice. The Pitt project was the first in-depth study of skeletal remains from Tophets.

The team examined the skeletal remains from 348 urns for developmental markers that would determine the children's ages at death. Schwartz and Houghton recorded skull, hip, long bone, and tooth measurements that indicated most of the children died in their first year, with a sizeable number aged only two to five months. At least 20 percent of the sample was prenatal.

Schwartz and Houghton then selected the teeth from 50 individuals they had concluded died before or shortly after birth. They sent the teeth to Macchiarelli and Bondioli, who specifically looked for a neonatal line, an opaque band that forms in human teeth between the interruption of enamel production at birth and its resumption within two weeks of life. Identification of this line is commonly used to determine an infant's age at death.

Macchiarelli and Bondioli found a neonatal line in the teeth of 24 individuals, meaning that the remaining 26 individuals died prenatally or within two weeks of birth.

More information on the project is available on Pitt's Web site at www.news.pitt.edu/news/Schwartz-Carthage-infant-sacrifice. 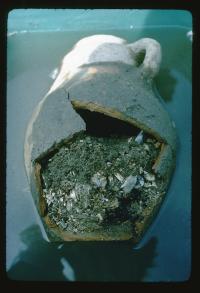