Juvenile African penguins search large areas of ocean for certain signs which usually mean there is plenty of prey.

But rapid shifts caused by climate change and fishing mean these signs can now lead them to places where food is scarce - a so-called "ecological trap".

The research reveals the effect of a marine ecological trap for the first time, with low survival rates among juvenile penguins, and models suggesting breeding numbers about 50% lower than if the birds were able to escape the trap.

"Environmental degradation can cause maladaptive habitat selection, meaning cues which used to work for a species now put them in danger," said first author Dr Richard Sherley, of the Environment and Sustainability Institute on the University of Exeter's Penryn Campus in Cornwall.

"Juvenile African penguins look for areas of low sea temperatures and high chlorophyll-a, which indicates the presence of plankton and therefore the fish which feed on it.

"These were once reliable cues for prey-rich waters, but climate change and industrial fishing have depleted forage fish stocks in this system."

The University researchers teamed up with government scientists from South Africa and Namibia to deploy satellite trackers on 54 juvenile penguins from eight colonies covering the species' breeding distribution.

Dr Sherley said overfishing off Namibia and the combined effect of commercial fishing and environmental changes off western South Africa had dramatically reduced populations of fish preyed on by penguins.

He said small changes in the temperature and salinity of the waters in the area (known as the Benguela ecosystem) where fish such as sardines and anchovies used to aggregate had caused these species to move their distribution hundreds of kilometres to the east.

He added: "Climate change and fisheries are transforming the oceans, but we don't have a complete understanding of their impact.

Dr Stephen Votier, also of the University of Exeter, said: "This ecological trap was only discovered when young penguins were tracked from multiple colonies.

"This highlights the power of studying animal movements, particularly for long-lived marine species like penguins.

"In fact, tracking is now a crucial tool in conservation biology."

The African penguin, previously known as the jackass penguin, is listed as endangered by the International Union for Conservation of Nature, which says the species is "undergoing a very rapid population decline" which shows "no sign of reversing". 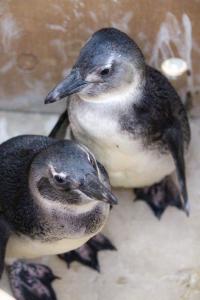