People don't really tend to see ghosts or guardian angels as much as "feel" them, and now researchers reporting in the Cell Press journal Current Biology on November 6 think they know where that "feeling of a presence" (FoP) phenomenon comes from, based on studies of 12 patients with various neurological conditions. The researchers have also successfully devised a robot capable of giving otherwise healthy people the same feeling, simply by sending mixed-up sensorimotor signals to the brain.

"In our first experiment [with the robot], thirty percent of the healthy participants spontaneously reported the feeling of having somebody behind them, touching them," says Olaf Blanke of Ecole Polytechnique Fédérale de Lausanne. "Such spontaneous reports are quite unusual in the field of bodily illusions."

The robot-induced FoP was so disconcerting for two of the healthy study participants, in fact, that they wanted to stop the experiment.

The FoP patients the researchers studied perceive those invisible presences for periods of seconds to minutes as a result of a number of underlying conditions, including epilepsy, stroke, migraine, and tumors. Blanke and his colleagues traced those frequent misperceptions of a being that isn't there to damage in any of three brain regions: the temporoparietal, insular, and especially the frontoparietal cortex.

But many healthy people also experience the FoP in a variety of situations. The discovery of those brain lesions together with patient reports, their associated sensorimotor deficits, and other evidence led the researchers to an idea: perhaps FoP can be caused by confusion over the source and identity of sensorimotor signals. As a result, people misattribute their own bodily signals or movements as something "other"—and that ghostly sensation is born.

To test the theory, the researchers built a master-slave robot, which allowed them to apply physically impossible sensorimotor conflicts. The robot made the participants of the study feel as though they were reaching out in front of them and touching their own backs. When the robotic stimulation was asynchronous with the individual's own body movements, something rather remarkable happened: people felt, in some cases very strongly, as though there were another person standing behind them, touching them. Those individuals also felt as though their bodies drifted backward in space, toward this mysterious, other presence, and judged that there were more people in the room.

The researchers explain what happened to those study participants as a result of the sensorimotor conflict this way: "This spatiotemporal conflict was resolved by our participants by generating the illusory experience that the felt touch was not caused by themselves, but by another person behind them who was touching their back."

The findings explain an experience that has influenced mystical thought, fiction, and humanity itself, but it may shed light on schizophrenic hallucinations, too.

"Collectively," the authors write, "the present neuroimaging and robotics data provide a solid scientific explanation for the FoP and link a phenomenon that appears at first sight as strange and complex to basic mechanisms of sensorimotor signal integration in a cortical network centering in frontoparietal cortex and a prominent account of positive symptoms in schizophrenia." 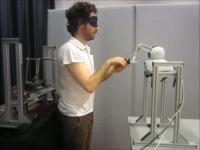 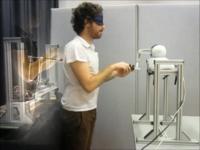