WASHINGTON, Nov. 25, 2013—It was the day after Thanksgiving in 1981, and like most others across the nation, Rangaswamy "Sri" Srinivasan, a researcher at IBM's Thomas J. Watson Research Center in New York, had brought some turkey with him to work. The difference between Srinivasan and everyone else was that the scientist had no plans to eat the leftovers.

He was planning to fire a laser at them!

And it turned out to be the landmark first ingredient in a recipe that would soon give us laser-assisted in situ keratomileusis, or LASIK, and photorefractive keratectomy, or PRK, the refractive eye surgery techniques that have been used worldwide for 20 years to correct the eyesight of more than 30 million people.

In the latter part of 1981, Srinivasan, along with IBM colleagues James Wynne and Samuel Blum, had been looking for a suitable animal tissue on which they could try out a new tool in their laboratory, an argon fluoride (ArF) excimer laser. The trio believed that the laser's short pulses of ultraviolet light could be directed to make a clean cut through tissue without damaging the surrounding or underlying cells. If they could demonstrate this ability, the researchers thought, the excimer laser might have a promising future as a surgical tool.

"We talked about delicate tissue, like butterfly wings and goldfish tails," Wynne says. "We could have used something from our cafeteria, but we thought that chopped meat such as hamburger would have too rough a surface to yield easily interpreted results."

Then on Thanksgiving, somewhere between his stuffing and pumpkin pie, Srinivasan found the perfect test subject for the excimer laser sitting on his plate. "Sri got the idea to save a turkey bone with some cartilage on it and bring it to the lab the next day," Wynne says. "It was a wise choice because the tissue was fairly rigid and the surface was smooth, making it easier to observe the effects of laser irradiation."

The historic first experiment took place on Nov. 27, 1981, when Srinivasan fired a number of 10 nanosecond pulses of light from the ArF excimer laser at what had been part of his dinner the night before. When observed under an optical microscope, the tissue revealed a clean-looking "incision" where the beam had struck it. With Blum, he then carried out further tests on turkey cartilage under controlled conditions, carefully measuring how many pulses it took to make a cut, what amount of energy was delivered and what impact the laser made on the adjacent and underlying tissue.

"The answer to the final question was always none," Wynne says.

To confirm that the excimer laser could photoetch tissue with scalpel-like precision, Wynne performed a control experiment on the turkey cartilage. "I used the green light of a frequency-doubled Nd:YAG [neodymium-doped yttrium aluminum garnet] laser to irradiate one of the samples that Sri had already cut with the excimer laser," he says. "There were no smooth grooves like those produced by the excimer laser, only burned, charred tissue. At that moment, I realized that we really did have an entirely new form of laser surgery!"

Excited by their results, Wynne, Blum and Srinivasan quickly wrote up an invention disclosure. "Sri and I decided that we had to share our discovery with the medical and surgical community by entering into collaborations," Wynne explains. "We had the laser; the doctors had a wide variety of potential tissues for us to try it on."

The second sample tested by the researchers was an aorta taken from a cadaver at a New York City hospital. "Using our two lasers for the first time on human tissue, we got the same results as with the turkey; the ArF excimer laser produced incredibly clean and well-defined incisions, while the green laser left necrotic, burned tissue," Wynne says.

Getting the good news out to their peers, however, didn't start out so easily.

"Once our patent application on excimer laser surgery was filed, Sri, Sam and I wrote a paper and submitted it to a major journal," Wynne remembers. "It was rejected because one of the reviewers was concerned that ultraviolet irradiation of living tissue might lead to cancer. So, we submitted the paper to a trade journal, Laser Focus, and it was published in May 1983. After that, the ophthalmologists found us, and together we took the first steps on the road to LASIK and PRK."

The medical breakthrough that began with a brainstorm during a Thanksgiving dinner was recognized earlier this year when Wynne, Blum and Srinivasan were awarded the National Medal of Technology and Innovation. At the ceremony in February, Wynne says his daughter asked President Obama if he knew anyone who had undergone laser refractive surgery. The president replied, "Yes, my wife Michelle."

"Imagine, the First Lady's eyesight was corrected by a procedure for which our turkey experiment laid the foundation," Wynne says proudly. "We believed that the excimer laser could be used to incise living tissue, and our vision turned out to be correct—no pun intended!"

Today, Wynne is still at IBM and is still working on new medical applications for the ArF excimer laser. His current project seeks to turn the laser into a "smart scalpel" that would delicately remove a layer of dead tissue, such as that seen in third-degree burn patients, without affecting the viable skin around it.

Details of the IBM team's historic 1981 breakthrough are further explained in Wynne's complete article, "Excimer Laser Surgery - Laying the Foundation for Laser Refractive Surgery." The piece is part of the upcoming OSA Centennial History Book, a collection of articles capturing the 100-year history of The Optical Society in the context of the evolution of optics research and the optics industry.

How a leftover Thanksgiving dinner gave us LASIK surgery

Micrograph of a Human Hair 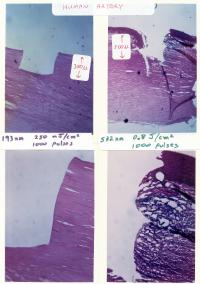