The proposals were selected under The Apollo Next Generation Sample Analysis or ANGSA program. Its goal is to is maximize the science derived from samples returned by the Apollo Program in preparation for future lunar missions anticipated in the 2020s and beyond. The newly selected proposal teams will conduct research on specially curated materials from the Apollo 15 and 17 sample collections, including samples that were collected on the Moon and never opened on Earth, as well as samples that have been in cold storage since their initial processing after return to Earth.

The first team, led by principal investigator Jamie Elsila, will study the abundances of volatile compounds that may be precursors to amino acids that have been detected previously in lunar samples. The study will seek to understand if organic compounds are better preserved in shadowed regions on the Moon, and if their abundances vary by depth, which can help scientists better understand lunar chemistry. The work will be carried out in Goddard's Astrobiology Analytical Laboratory.

"This is a unique and exciting opportunity to use state-of-the-art techniques on lunar samples that have been preserved for almost 50 years and to study questions that scientists at the time may have asked but didn't have the ability to answer," said Jamie Elsila from Goddard. "It's a privilege to have access to these special samples and we hope to contribute not only to increase our knowledge of lunar chemistry but also to improve our understanding of how to best preserve samples returned by future NASA missions."

Complementing Elsila-Cook's work with organic molecules, a team led by Natalie Curran and Barbara Cohen will use noble gases to investigate the geologic history of the samples. Noble gas abundances reflect how long a sample has resided at the lunar surface, being exposed to the damaging effects of cosmic rays, which may affect the organic material. The team will also use noble gas ratios to investigate geologic events (e.g., impacts, landslides) that were important in shaping the surface from which the pristine samples were collected. This work will be conducted at Goddard's Mid-Atlantic Noble Gas Research Lab (MNGRL), the Smithsonian National Museum of Natural History, and the Carnegie Institution.

"Getting the chance to work on these samples is like participating in a completely new mission to the Moon," Curran said. "Even though these are Apollo samples, they've never been opened, and we don't know what surprises are in store for us. I'm excited to have a part in our generation's era of exploration of the Moon."

NASA is going to the Moon and on to Mars, in a measured, sustainable way. The direction from Space Policy Directive-1 builds on the hard work NASA is doing on its SLS and Orion spacecraft, agency efforts to enable commercial partners, its work with international partners at the International Space Station in low-Earth orbit, and what NASA learns from its current robotic missions at the Moon and Mars. Learn more at: 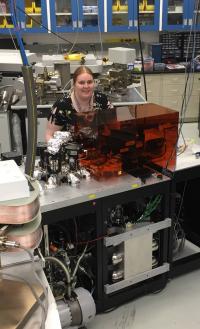