Evolving the largest eyes among all known arachnids may have helped the net-casting spider add walking prey to its airborne menu of midnight snacks, says new research from University of Nebraska-Lincoln biologists.

Doctoral student Jay Stafstrom reached the conclusion after two months living out of a tent in a Florida state park, where he observed how the nocturnal species Deinopis spinosa hunted with and without the aid of secondary eyes roughly 2,000 times more light-sensitive than human eyes.

The net-casting spider earns its name by spinning a rectangular band of wooly silk to capture prey while rappelling upside-down from a single thread. When the time comes, the spider lunges forth and stretches the net to engulf prey in one fell swoop that lasts about one-thousandth of a second.

Stafstrom discovered that the spider snared prey about 3 1/2 times more often when relying on its massive secondary eyes than when those eyes were covered by vision-impairing dental silicone. But the effect seemed to depend on whether that prey traveled by leg or by wing.

While the silicone had no discernible effect on the species' ability to snag flying prey, it greatly reduced the odds of the spider capturing a crawling critter. Though one of every four specimens without the silicone blindfold would capture prey that walked their way -- roughly the same proportion that caught prey flying through their attack radius -- none managed to snare a walking meal while their vision was impaired.

Stafstrom collected the data by reviewing infrared video footage from four closed-circuit cameras that he set up in Paynes Prairie Preserve State Park. The footage further revealed that the average ground-bound prey was nearly twice as long as the flying variety, suggesting the former may provide greater nutritional value, Stafstrom said.

The findings may also help explain why D. spinosa is one of the few web-building spiders to have evolved large secondary eyes, which are more common among species that hunt along the ground and rely less on vibrational cues to find prey.

"Vision is really expensive," said Stafstrom, who co-authored a new study with faculty adviser Eileen Hebets. "Simply keeping photoreceptors healthy and functional requires a lot of energy. Now if you wanted to grow the size of the eye to gain more visual information, it would become disproportionately more expensive as the mass of the eye increases. It's a really good example of the Law of Diminishing Returns, where you're spending way too much to get just a little bit more information.

"(The spiders) can still catch things out of the air (without those eyes). Why are they, presumably, investing so much in these large eyes? One of our hypotheses is that it's because there's a lot of prey on the ground, and by having vision in these enlarged eyes, not only are they getting things off the ground, but those things are bigger and probably more nutritious."

Stafstrom and Hebets ran a similar experiment in the lab, placing each net-casting spider in a cylindrical arena with a cricket. Though some blindfolded spiders eventually captured the crickets, they did so only when their prey bumped into the silken support beams of the spiders' A-shaped webs. On average, the successful blindfolded hunters still took 10 times longer to catch a cricket than when aided by their secondary sight.

The researchers also suspect that the spider's enlarged secondary eyes -- just two of their eight total -- enabled it to become a solely nocturnal hunter. The species literally lies low during the day, pulling together its legs while stretching out to resemble the tips of the palm fronds it often inhabits. This nocturnal nature likely helps the spiders avoid predators that rely on sight to track their prey, Hebets said.

Stafstrom said he never saw the spiders move before sunset. In fact, he struggled to even find them.

"Not only are they really looking like a stick and (lying) completely motionless, but on their first pair of legs, they actually have some hairs that puff out a bit and cover their eyes somewhat," he said.

Locating the spiders represented just one of the challenges that Stafstrom faced during his two-month field experiment amid the humidity and frequent downpours of a Florida summer.

His first tent was too small, so he had to purchase another. His closed-circuit cameras, which he powered with car batteries, recorded in analogue rather than digital format. Though he had purchased laptops to digitize the signals and allow him to review the video on site, his initial approach failed.

"The first two weeks were really bad," he said. "I thought everything would be peachy, (but) it was not peachy. I actually went to RadioShack a couple of times and made a friend there. We soldered some stuff together and found a way to make it work."

Catching and restraining the spiders required the assistance of garbage bags. Applying the dental silicone demanded many wooden toothpicks and more patience. Stafstrom even improvised to ensure his cameras would have the proper vantage points.

"I MacGyver-ed it," he said. "I had a bunch of palm fronds that were dead, so I shaved them so that I could make tripods out of them."

Hebets said the toil paid off in the form of insights that Stafstrom could not have gained in the lab alone.

"The fact that such a large component of this was done in the field, in pretty harsh conditions, is amazing," said Hebets, professor of biological sciences. "It was a ton of work and physical hardship and technical hardship. The data came out beautifully, but the effort behind it was monumental."

The researchers' study, "Nocturnal Foraging Enhanced by Enlarged Secondary Eyes in a Net-Casting Spider," appeared in the journal Biology Letters.

What big eyes you have! Spider adaptation widened dietary net 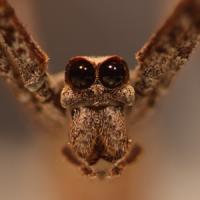 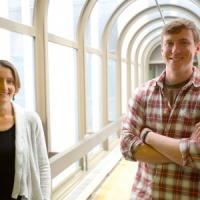