TEMPE, Ariz. – What started out as a project to teach undergraduate students about network analysis, turned into an in-depth study of whether it was possible to analyze a National Basketball Association (NBA) basketball team's strategic interactions as a network. Arizona State University researchers discovered it is possible to quantify both a team's cohesion and communication structure.

The researchers' findings appear in an online November issue of PLOS ONE.

Jennifer Fewell, a professor in ASU's School of Life Sciences in the College of Liberal Arts and Sciences, and lead investigator on the project, explains that because teams are an integral part of both human and animal societies — understanding how a team's interactions as a whole affect its success or failure is important.

"We were able to come up with a hypothesis about strategy and then apply network analysis to that," says Fewell. "Often, people simply create networks and then conduct descriptive analysis of them, but they don't actually explain why they would expect an individual in a group to communicate the way they do. We take a different approach by suggesting that there are potentially successful ways to organize your team if you use this strategy then we should expect this network metric to show up as an indicator – sort of a proof of concept."

The researchers measured two offensive strategies to learn whether differences in offensive strategy could be determined by network properties. First, they looked at whether teams moved the ball to their shooting specialists — measured as "uphill/downhill flux," and second, whether they passed the ball in an unpredictable way — measured as team entropy. They analyzed games from the first round of playoffs in the 2010 season — and gathered an extensive amount of data on 16 teams.

To evaluate the teams as networks, researchers graphed player positions and ball movement among players, as well as shots taken. Then, they used that data to find out whether network metrics can measure team decisions in a useful way. The study involved more than 1,000 ball movements and 100 ball sequences.

"What that paper basically says is the 2010 data shows that the most successful teams are the ones that use a less predictable, more distributed offense and that connect their players more," said Fewell. "Those were the teams that had actually hired more elite players and allowed them to work together."

"It's one way to capture the essence of a team and teams are everywhere for people," Fewell explained. "You work in teams for all different kinds of reasons. And the same, fundamental idea of cohesion and communication structure among the individuals and the team is critical and it's not easily quantified – and this gives you a way to quantify it."

Fewell talked about how her favorite team, the Phoenix Suns, measured up.

"I started working on this in part because I'm a Suns fan, especially of the 'run and gun' Suns," shared Fewell. "Our data suggested though that the 2010 Suns played the game as a fairly traditional point-guard centered play style. The Lakers and Celtics, in contrast, showed the network equivalent of the triangle offense, and it paid off for them. They were the teams in the finals that year."

The study included researchers from ASU's School of Life Sciences, School of Mathematical and Statistical Sciences, and Center for Social Dynamics and Complexity. 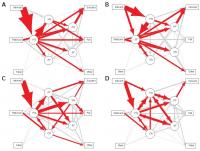