The premise of heated tobacco (HT) is simple: tobacco leaf is heated, never burnt, so avoiding many harmful by-products of combustion for the user. The exhaled 'mist' is correctly termed an aerosol, which is almost invisible and far less dense and pungent than the exhaled smoke from combustible cigarettes.

Another advantage of HT is that there are no 'side-stream' emissions to impact air quality (or disturb bystanders - these emissions form part of the ambient smoke that's often known as environmental tobacco smoke (ETS) or 'second-hand' smoke), because unlike a combustible cigarette there is no constantly burning tip. Our previous research suggests that, unlike cigarettes, using our Pulze heated tobacco device causes no negative impact on indoor air quality (IAQ).

As the HT category grows in popularity as a potentially less harmful alternative to combustible cigarettes amongst adult smokers, there will likely be a desire for more information about how exhaled HT aerosol behaves around both users and bystanders. For these reasons we commissioned an independent research study undertaken by leading EU air quality researchers at the Kaunas University of Technology, Lithuania, to find out how our HT device Pulze's exhaled aerosol behaves in terms of spatial and temporal dynamics compared to combustible cigarette smoke.

The results, published in the peer-reviewed journal Aerosol and Air Quality Research, demonstrate:

How does exhaled heated tobacco aerosol behave in the air? 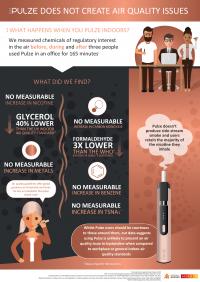