A new study released today in Scientific Reports announced the surprising discovery of abundant, well-preserved 110-120-million-year-old footprints, belonging to a large bipedal ancestor of modern-day crocodiles from the Lower Cretaceous Jinju Formation of South Korea. The team of palaeontologist trackers that made the discovery includes researchers from Korea, Australia, and University of Colorado Denver professor, Martin Lockley.

While palaeontologists knew that some crocodiles from the "age of dinosaurs" were more adapted to life on land than their modern relatives, these were small animals about one meter long with footprints showing they walked on all fours.

The team named the 18-24 cm-long tracks Batrachopus grandis emphasizing the large size in comparison with much older and smaller 2-3 long cm tracks of the Batrachopus type, commonly found in the Jurassic of North America.

"Nobody expected such large bipedal crocs," said Martin Lockley, a University of Colorado professor who has been studying fossil footprints in Korea for 30 years. "The Jinju Formation is so rich in tracks; you can read the entire ecology."

The discovery of well-preserved tracks is important to palaeontologist trackers because they show details of skin impressions as clear as if made yesterday. Tracks also read the pattern of pads, showing foot bone structure and the tell-tale narrowness of trackways which show a bipedal gait, different from the sprawling posture of modern crocodiles. There has even been evidence from parallel trackways that show they may have travelled in social groups, just like their dinosaur cousins.

Among with the remains of some of the oldest terrestrially adapted crocodiles, are large Triassic species, more than 200 million years old, that some palaeontologists think may have been bipedal, based on anatomy.

"The Korean trackways prove this hypothesis, at least for the Cretaceous Period," said co-author of the study, Anthony Romilio. "It also proves this adaptation was effective for millions of years, even with big fierce dinosaurs running around."

The new study has also solved a tracking mystery dating back to 2012, when some poorly preserved tracks of a bipedal animal were first found in another South Korean rock unit, described as "enigmatic." There was debate over whether the giant pterosaurs were bipeds, quadrupeds or possibly even pterosaurian or human. 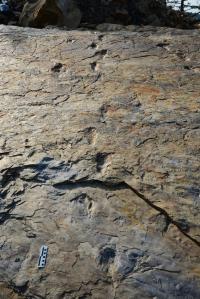 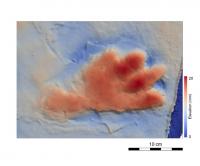