Today in Australia they call it Kauri, in Asia they call it Dammar, and in South America it does not exist at all unless planted there; but 52 million years ago the giant coniferous evergreen tree known to botanists as Agathis thrived in the Patagonian region of Argentina, according to an international team of paleobotanists, who have found numerous fossilized remains there.

"These spectacular fossils reveal that Agathis is old and had a huge range that no one knew about -- from Australia to South America across Antarctica," said Peter Wilf, professor of geoscience, Penn State.

Agathis trees currently grow thousands of miles from Argentina, ranging from Sumatra to New Zealand. They often prefer mountain rainforests, where it is wet and warm all year round. They can grow as tall as 200 feet, but are usually between 130 and 150 feet at maturity. Economically, they are prized and heavily cut for their soft, workable wood. In the past, the Agathis resin, known as manila copal, was exploited for linoleum and varnishes, but synthetics replaced most of that use.

The researchers report in the current issue of American Journal of Botany that "Agathis was a dominant, keystone element of the Patagonian Eocene floras, alongside numerous other plant taxa that still associate with it in Australasia and Southeast Asia."

"There is a fossil record of Agathis in Australia and New Zealand, where it still lives," said Wilf. "However, Agathis fossils have never been found anywhere else until now, and they have never been as complete as these."

Wilf and his colleagues work at two sites in Patagonia, Argentina: Laguna del Hunco that dates to the early Eocene at about 52.2 million years ago, and Río Pichileufú dating to about 47.7 million years ago.

"These sites were discovered in the 1920s and 1930s, but the remoteness of the locations and the hardness of the rock are why they hadn't been investigated in detail before we started in 1999," said Wilf. "Now, with modern amenities -- satellite phones for example -- and especially the presence of our partner institution, the Egidio Feruglio Museum, in the same region as the dig sites, recovering these fossils becomes much easier."

Agathis grew in Patagonia when South America was part of the remainder of the southern supercontinent of Gondwana, comprised of South America, Antarctica and Australia. Much earlier, India, Madagascar, New Zealand and Africa separated and moved north, but around the time of these fossils, South America was just beginning to part from Antarctica, which was not ice covered at the time.

"Agathis probably existed in all three areas, Australia, Antarctica and South America, at that time," said Wilf. "Climate change in Antarctica -- the cold and ice -- killed them there, and a change to seasonal dryness in southern South America put an end to them in Patagonia."

Subsequently, the trees, which are wind dispersed, moved away from the cooling south, and some left northward-moving Australia for southeast Asia, where they thrive except for human interference, but they no longer grow in cold, often dry, Patagonia.

Wilf 's team recovered not only leaves, but also numerous branches, pollen cones, seed cones and even a winged seed still attached to the cone. The various species of Agathis are usually identified by their pollen cones, so this is the first time that a fossil Agathis could be directly compared to trees growing today.

"We also went to Borneo and studied the most similar living relative of the fossil Agathis, a threatened species there," said Wilf. "We collected DNA samples to better understand the fossil-modern relationship."

According to the researchers, the Argentinian fossil Agathis clearly belongs to the same natural group as those living today up to almost 10,000 miles away in the tropical West Pacific.

"Agathis is a very dramatic example of survival via huge range shifts, from the far south to the tropics, in response to climate change and land movement over millions of years," said Wilf. "It is not clear that Agathis can adapt to the severely more rapid human-induced pressures it is experiencing now from deforestation, selective logging and climate change." 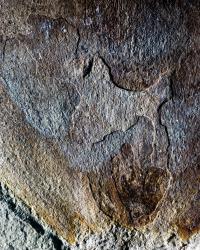 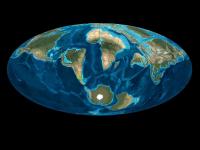