NASA calculated the rainfall left in the wake of now post-tropical cyclone Irma as it moved through the Caribbean Sea to landfall in Florida and then captured a night-time look at the storm as it moved over Georgia.

NASA found that Irma dropped extremely heavy rain at times during its trek. Starting from near the Cape Verde Islands in the eastern Atlantic Ocean all the way across the Atlantic to the western Atlantic's northern Leeward Islands, Cuba and the southeastern United States.

Data from the Global Precipitation Measurement mission (GPM) is used to develop rainfall total estimations. GPM is a joint mission between NASA and the Japan Aerospace Exploration Agency, JAXA.

NASA's Integrated Multi-satellitE Retrievals for GPM (IMERG) data were used to estimate the total amount of rain that Hurricane Irma dropped from September 5 to early September 12, 2017. During that period Irma dropped heavy rain along its path from the Leeward Islands until weakening to a post-tropical cyclone over the southeastern United States. Rainfall totals were often greater than 6 inches (152.5 mm) around Irma. The greatest IMERG rainfall estimates were indicated by more than 20 inches (512 mm) over Cuba.

A Night-Time Look at a Weaker Irma

On Sept. 12, 2017 at 3:03 a.m. EDT (0703 UTC) the Visible Infrared Imaging Radiometer Suite (VIIRS) instrument aboard NASA-NOAA's Suomi NPP satellite provided a night-time infrared image of Irma when its center of circulation was located over Georgia. The VIIRS image showed the large extent of Irma over Florida, Georgia, Alabama and the Carolinas.

At 5 a.m. EDT on Sept. 12 the center of Post-Tropical Cyclone Irma was located near 33.0 degrees north latitude and 85.2 degrees west longitude. That's about 65 miles (110 km) southwest of Atlanta, Georgia.

NOAA's Weather Prediction Center (WPC) said "Irma has lost its tropical characteristics in the last several hours, and is now classified as a post-tropical cyclone. Irma has been moving northwestward through the southeast U.S. and will continue this motion and approach the Tennessee valley by Tuesday afternoon, Sept. 12. Irma is expected to weaken throughout the day. Minimum central pressure is 998 millibars.

An image from NOAA's GOES-East satellite showed Irma's clouds covering the southeastern U.S. and extending into the Mid-Atlantic on Sept. 12 at 10 a.m. EDT (1400 UTC).

Irma continues to generate large rainfall. Flash flood watches are in effect for portions of the southern Appalachians and Flood warnings and advisories are ongoing scattered throughout the southeastern U.S. For local warnings and watches visit: http://www.weather.gov.

WPC stated "Remnant bands from Post-Tropical Cyclone Irma are expected to produce additional rain accumulations of 1 to 3 inches with isolated 5 inches through Tuesday across northern South Carolina into southern and western North Carolina. Localized intense rainfall rates will lead to additional isolated areas of flash flooding and rapid rises on creeks, streams, and rivers. Closer to Irma's remnant circulation center, an additional 1 to 2 inches of rainfall is expected across northern Mississippi, Northwest Alabama, eastern Arkansas, western Tennessee, and western Kentucky. Significant river flooding will persist over much of the Florida peninsula in the wake of Irma, while additional river flooding will be possible across Georgia and eastern Alabama.

For updates on Irma visit: http://www.nhc.noaa.gov/#Irma 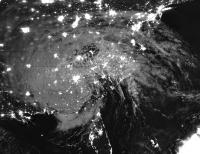