CORVALLIS, Ore. – Researchers conclude in a new report that a global push for small hydropower projects, supported by various nations and also the Kyoto Protocol to reduce greenhouse gas emissions, may cause unanticipated and potentially significant losses of habitat and biodiversity.

An underlying assumption that small hydropower systems pose fewer ecological concerns than large dams is not universally valid, scientists said in the report. A five-year study, one of the first of its type, concluded that for certain environmental impacts the cumulative damage caused by small dams is worse than their larger counterparts.

The findings were reported by scientists from Oregon State University in the journal Water Resources Research, in work supported by the National Science Foundation.

The conclusions were based on studies of the Nu River system in China but are relevant to national energy policies in many nations or regions – India, Turkey, Latin America - that seek to expand hydroelectric power generation. Hydropower is generally favored over coal in many developing areas because it uses a renewable resource and does not contribute to global warming. Also, the social and environmental problems caused by large dam projects have resulted in a recent trend toward increased construction of small dams.

"The Kyoto Protocol, under Clean Development Mechanism, is funding the construction of some of these small hydroelectric projects, with the goal of creating renewable energy that's not based on fossil fuels," said Desiree Tullos, an associate professor in the OSU Department of Biological and Ecological Engineering.

"The energy may be renewable, but this research raises serious questions about whether or not the overall process is sustainable," Tullos said.

"There is damage to streams, fisheries, wildlife, threatened species and communities," she said. "Furthermore, the projects are often located in areas where poverty and illiteracy are high. The benefit to these local people is not always clear, as some of the small hydropower stations are connected to the national grid, indicating that the electricity is being sent outside of the local region.

"The result can be profound and unrecognized impacts."

This study was one of the first of its type to look at the complete range of impacts caused by multiple, small hydroelectric projects, both in a biophysical, ecological and geopolitical basis, and compare them to large dam projects. It focused on the remote Nu River in China's Yunnan Province, where many small dams producing 50 megawatts of power or less are built on tributaries that fall rapidly out of steep mountains. There are already 750,000 dams in China and about one new dam is being built every day, researchers say.

Among the findings of the report as it relates to this region of China:

"One of the things we found generally with small dams is that there was much less oversight and governance with the construction, operation and monitoring of small hydropower," Tullos said. "On the large, main stem dams, people pay attention to what's going on. On a small hydropower project, no one notices if minimum flows are being maintained. Or if a pump breaks, the hydropower station might sit idle for long periods of time."

Researchers said the key finding of the research, contrary to prevailing but unvalidated belief, is that "biophysical impacts of small hydropower may exceed those of large hydropower, particular with regard to habitat and hydrologic change."

Editor's Note: Digital images are available to illustrate this story.

River with no flow, all water diverted by dams: http://bit.ly/17TX9OP

The study this story is based on is available online: http://bit.ly/14XWxBu 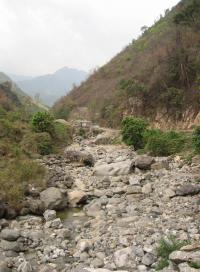