Water fleas can thwart their enemies by growing defensive structures such as helmets and spines. What's more, this predator-induced 'arming' process is not a one-size-fits-all approach - they can even tailor their defensive responses to the types of predators present.

How are water fleas (Daphnia) able to do this and how does it impact the ecosystems of ponds and lakes? Dr Linda Weiss at Ruhr-University Bochum, Germany, who is leading this research explains: "As they grow up and moult, juvenile Daphnia can develop formidable 'armour', including helmets, spines or crests, when they detect specific chemical cues in the water left by predators such as fish, phantom midge larvae and backswimmers. These defences are speculated to act like an anti-lock key system, which means that they somehow interfere with the predator's feeding apparatus. Many freshwater fish can only eat small prey so, for example, Daphnia lumholtzi grows head and tail spines to make eating them more difficult."

Daphnia's defensive modifications have been well documented, with recent research showing small appendages [called the antennules] detect predator cues in the water, however they are so small and inaccessible that testing their role in cue detection has been incredibly difficult.

Dr Weiss's team has identified specific neurotransmitters that can translate the incoming predator cues into hormonal responses, which are responsible for the change in body shape. "Dopamine, in particular, appears to code neuronal signals into endocrine signals, which include juvenile hormones," Dr Weiss explains. "In fact, juvenile hormones promote regional growth in many arthropods implying that this hormone signalling is an important, highly conserved endocrine pathway that regulates the response to changing environmental conditions."

Studying the 'phenotypic plasticity' of Daphnia's defences based on environmental cues can help researchers understand how it impacts ecosystems in ponds and lakes. "This research will help in our understanding of the composition and population dynamics of freshwater ecosystems," adds Dr Weiss. "As freshwater is one of the most important resources on earth, it is important to study the communities it holds." 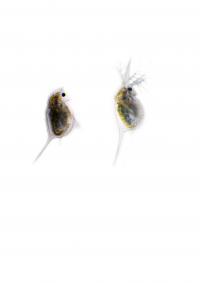