Norfolk, Va. — A first-of-its-kind collaboration between People for the Ethical Treatment of Animals (PETA), Seattle-based medical simulation manufacturer Simulab, and trauma surgeons in nine countries is saving animals and modernizing medical training in Latin America, the Middle East, and Asia.

Until now, limited budgets have prevented many international programs that teach the popular American College of Surgeons–sponsored Advanced Trauma Life Support (ATLS) course from establishing modern simulation laboratories, which are standard in the US and Canada. As a result, ATLS trainees were required to cut crude holes into the chests, throats, abdomens, and limbs of thousands of live dogs, goats, pigs, and sheep each year.

An agreement between PETA, Simulab and surgeons in Bolivia, Costa Rica, Egypt, Iran, Jordan, Mexico, Mongolia, Panama, and Trinidad and Tobago is bringing 64 state-of-the-art TraumaMan surgical simulators to the nations to replace their use of animals to train thousands of doctors to perform lifesaving surgical procedures on victims of traumatic injuries. TraumaMan replicates a breathing, bleeding human torso and has realistic layers of skin and tissue, ribs, and internal organs.

"PETA's collaboration with Simulab and surgeons around the world will provide doctors with the most advanced lifesaving trauma training available and prevent thousands of animals from being hurt and killed," says PETA Director of Laboratory Investigations Justin Goodman. "This international partnership shows that animal welfare and human welfare go hand in hand."

Through the formal agreement, PETA is donating the 64 TraumaMan systems and Simulab has extended ATLS programs in the nine nations a special discount on the replacement "skins" meaning that training facilities will now spend less to use TraumaMan than they did to use animals. Additionally, because TraumaMan is portable, these countries can now offer the courses more frequently and expand their ATLS programs into remote regions.

Studies show that doctors who learn lifesaving surgical skills on TraumaMan are more proficient than those who cut into animals, largely because TraumaMan actually mimics human anatomy and allows trainees to repeat procedures until they're confident and adept.

PETA's donation of TraumaMan systems, also supported by PETA Germany and the McGrath Family Foundation of San Diego, is the group's single-largest contribution to promote the use of non-animal scientific methods to date.

Partnership between PETA, Simulab and surgeons brings $1 million in simulators to 9 countries

Funder
People for the Ethical Treatment of Animals 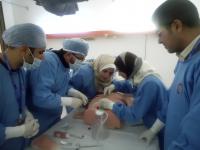