Ancient pollen samples and a new statistical approach may shed light on the global rate of change of vegetation and eventually on how much climate change and humans have played a part in altering landscapes, according to an international team of researchers.

"We know that climate and people interact with natural ecosystems and change them," said Sarah Ivory, assistant professor of geosciences and associate in the Earth and Environmental Systems Institute, Penn State. "Typically, we go to some particular location and study this by teasing apart these influences. In particular, we know that the impact people have goes back much earlier than what is typically accepted as the case. However, we haven't been able to observe the patterns created by these processes globally or long-term."

Over the past 100 years, researchers have collected datasets of fossil pollen samples from coring existing and dried-up lakes. In the current study, rather than looking at collections from individual sites, the researchers looked at the world-wide compilation of pollen data. They examined 1,181 fossil pollen sequences using a statistical approach that is an extension of standard practices, but that uses a 500-year rolling window to determine how much and how quickly vegetation changed through time in locations around the world.

One early, major change in vegetation is seen when the most recent glaciers began to melt. Pollen changes during this period show significant vegetation change. Although there were humans around at the time, they mostly lived in what are now the tropics or were widely dispersed. The magnitude of vegetation change seen suggests that at this point, climate changes were responsible.

Another major signal of vegetation change appears with the expansion of agriculture, which is usually considered to have occurred 3,000 to 4,000 years ago.

The researchers report today (May 21) in Science, "We detect a worldwide acceleration in the rates of vegetation compositional change beginning between 4.6 and 2.9 thousand years ago that is globally unprecedented over the past 18,000 years in both magnitude and extent."

They add that "the scale of human effects on terrestrial ecosystems exceeds even the climate-driven transformation of the last deglaciation."

"People have a presence, they are everywhere," said Ivory. "Even in places that are not very urbanized or might appear to be quite wild, often in the archaeological and fossil pollen record, we see legacies of the impact of people very early. How do biodiversity and resources change through time with respect to climate change and the impact that people have already had? How is it likely to change in the future?" she added.

While modern observations can supply some information, understanding what happened more than 100 years ago is only possible by looking at the fossil record and only on a global scale. That knowledge can inform on what might happen in the future.

"There were a lot of dynamic things happening over the last 11,000 years," said Ivory. "Ecosystems were reorganizing. Many of the megafauna went away. It's hard to explain all that without climate. However, during the later part of this period, there aren't major climate changes, so it is more likely human technology that is responsible."

According to Ivory, one next step is to incorporate a better understanding of what is causing these changes into the study. She also would like to look more closely at Africa.

"Human impacts in Africa are much more complex than in Europe or North America," said Ivory. "There is a much longer period when humans were around, developing culture, developing new technologies. We also don't have nearly as much data."

Pollen sample coverage of Africa is uneven. In the Sahara, samples only date to 6,000 years ago when lakes dried up and the area became a desert. Other areas, like East Africa, are well-covered. Ivory wants to consolidate the African data from a now-defunct database and look specifically at how changes in climate as well as changes in small-scale agriculture and hunter-gatherer and pastoralist practices interact with the landscape.

"One thing that the study does is make a distinction between detection and attribution," Ivory said. "We have the ability to test and detect times when ecosystems are changing. We can qualitatively say climate or people are responsible for the changes, but the attribution of who or what in each instance is the cause is still missing." 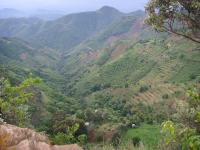