A rainfall analysis from GPM's Microwave Imager (GMI) and Dual-Frequency Precipitation Radar (DPR) showed that there were only a few areas where rainfall was still falling at moderate to heavy rates. The analysis showed rain falling at a rate of close to 41 mm (1.6 inches) per hour northwest of the approximate center of the tropical depression. The heaviest precipitation of almost 157 mm (6.2 inches) per hour was measured by DPR off the Mexican coast east of Veracruz.

At NASA's Goddard Space Flight Center in Greenbelt, Maryland, GPM's Radar (DPR Ku Band) were used to create a 3-D structure of precipitation within the weakening storm. DPR data showed that storm tops reached maximum heights of about 14.3 km (8.9 miles) in a few storms northwest of the storm's disorganized circulation. 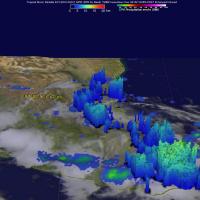