A research group formed by 64 researchers from the National Institute of Polar Research, the University of Tokyo, and other organizations analyzed atmospheric temperatures and dust for the past 720,000 years using an ice core obtained at Dome Fuji in Antarctica. Results indicate that when intermediate temperatures occurred within a glacial period, the climate was highly unstable and fluctuated. A climate simulation was also performed based on the Coupled Atmosphere-Ocean General Circulation Model, which revealed that the major cause of the observed climate instability was global cooling by a decline in the greenhouse effect.

The research groups of Dr. Kenji Kawamura and Dr. Hideaki Motoyama (National Institute of Polar Research) analyzed the Second Dome Fuji ice core (Fig. 1, left) that were obtained as part of the Japanese Antarctic Research Expedition (JARE) between 2003 and 2007. Their team reproduced fluctuations in the air temperature and dust (solid particulate matter carried by the atmosphere) in the Antarctic for the past 720,000 years (Fig. 1, right). They combined this with data from the Dome C ice core drilled by a European team to obtain highly robust paleoclimate data. They examined these data, discovering that for the past 720,000 years, the intermediate climate within glacial periods was marked by frequent climate fluctuations (Fig. 2).

An important factor affecting climate instability is the vulnerability of Atlantic deep water circulation during global cooling resulting from a decrease in the atmospheric carbon dioxide concentration (Fig. 3 D-E). Until now, the primary factor for climatic instability was thought to be the existence and instability of continental ice sheets in the Northern Hemisphere, but this experiment has revealed that carbon dioxide is another important factor, determining not only the average state of the climate, but also the long-term stability of the climate. These results also suggest that future stability in the present interglacial period, which has continued for more than 10,000 years, is not guaranteed. Indeed, if significant melting of the Greenland ice sheet occurs due to anthropogenic warming, it might destabilize the climate.

According to Dr. Kawamura, "Due to anthropogenic emissions, the atmospheric greenhouse gas concentrations have reached a level not seen over the past million years. Large climate components, such as ice sheets and the oceans that have vast size and longtime scales for variations, will undoubtedly change. It will become even more important to combine the climate reconstructions and numerical simulations for the periods when the global environment was much different than it is today, to understand the Earth system by verifying its mechanisms."

The study results have been published in the on-line journal, Science Advances.

Atmosphere and Ocean Research Institute, the University of Tokyo

University of the Ryukyus

Climate instability over the past 720,000 years 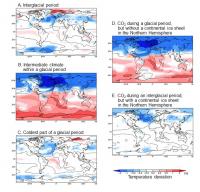