Tropical Storm Annabelle formed early on Nov. 21 in the Southern Indian Ocean, strengthened briefly and began a weakening trend on Nov. 23. NASA's Terra satellite and RapidScat instrument captured imagery of the storm after it developed.

At 05:35 UTC (12:35 a.m. EST), NASA's Terra satellite captured a visible image of Tropical Cyclone Annabelle. As the storm was intensifying, the MODIS instrument aboard Terra saw thick bands of thunderstorms wrapping into the low-level center of circulation from the north and northeast of the center.

On the same date, when the International Space Station passed over Annabelle, NASA's RapidScat instrument measured the maximum sustained winds around Annabelle's center. Strongest winds were near 30 meters per second (67 mph/108 kph).

On Nov. 22, the Atmospheric Infrared Sounder or AIRS instrument aboard NASA's Aqua satellite captured an image of Annabelle's cloud-top temperatures. Coldest cloud tops near -63F/-53C and strongest storms were around the center of circulation. Those cloud tops warmed on Nov. 23 as the storm weakened.

Tropical Storm Annabelle is on a weakening trend. Forecasters at the Joint Typhoon Warning Center noted that the storm has "become significantly elongated as it interacts with an approaching mid-latitude trough (elongated area of low pressure) and the associated high northwesterly vertical wind shear. The convection (developing storms) has started to weaken with warming cloud tops evident in the enhanced infrared satellite loop." When cloud tops warm on infrared satellite imagery, it means they are not being pushed as high in the troposphere (lowest level of the atmosphere). That indicates the storm has become weaker.

The Joint Typhoon Warning Center expects Annabelle to weaken to a depression by Nov. 25 and dissipate shortly thereafter. 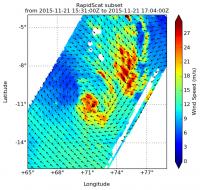 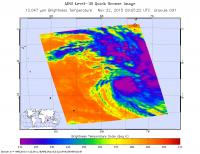