WASHINGTON, Jan. 23—In work that has major implications for improving the performance of building insulation, scientists at the University of Namur in Belgium and the University of Hassan I in Morocco have calculated that hairs that reflect infrared light may contribute significant insulating power to the exceptionally warm winter coats of polar bears and other animals. The research was published today in The Optical Society's (OSA) open-access journal, Optics Express.

Biophotonics expert Priscilla Simonis, a researcher at the University of Namur and lead author of the Optics Express paper, was intrigued by the ability of polar bears to insulate their bodies to temperatures of 37 degrees Celsius (98.6 F) even during long, cold winters when outside temperatures are a frigid -40 C (-40 F). The feat was especially impressive given that the bears have a layer of fur that is only 5 centimeters thick.

The insulating power of the animals' coats made Simonis wonder why thermal insulation in buildings doesn't work as well. "Why do we need at least 60 cm of rockwool or glasswool" – common types of building insulation made from minerals or glass fibers – "to get a temperature of 20 degrees Celsius inside from about -5 degrees Celsius outside?" she asked. "Why is the polar bear fur much more efficient than what we can develop for our housing?"

Simonis and her team tackled the question by re-examining two of the different ways heat can travel: radiation, which transfers thermal energy through electromagnetic waves, and conduction, which transfers thermal energy through the vibrations of neighboring atoms and molecules. Most people assume that fur and feathers keep animals warm primarily by trapping a layer of air that slows thermal conduction, says Simonis. But she and her colleagues suspected that radiation might play a bigger role.

The scientists performed some initial calculations that showed heat loss between two bodies separated by air would be dominated by radiation, not conduction. To further explore the radiative heat loss the team created a simple computer model consisting of a hot and a cold thermostat that roughly simulated an animal's warm body and the outside, colder environment. The two thermostats were separated by an empty space into which were added "radiative shields" that could mimic individual hairs in a fur coat.

In one version of the model, the researchers incorporated so-called black-body shields, which absorb all of the radiation that strikes them. In a second version, opaque grey-body shields were used. "A grey body has some transmission and reflection as well," Simonis explains.

Simonis and her colleagues found that as the reflectivity of the radiative shields increased, the rate of heat transfer between the hot and cold thermostat was dramatically reduced. Adding more shields also dramatically reduced the energy loss. All together, the model suggests that the repeated backscattering of infrared light between radiative shields, like individual hairs and barbed feathers, could be the primary mechanism for the thermal insulation properties of fur and feathers.

The light scattering properties of animals' coats can also have dual purposes, Simonis notes. With the right structure, fur and feathers can generate efficient thermal insulation in the far infrared range while also scattering visible light to produce a white appearance in the visible wavelength range. "This is particularly useful to animals, such as mammals and birds, that live in snowy areas," Simonis says, as it provides them with both warmth and camouflage against the white snow.

For humans, focusing on ways to minimize radiative heat loss could lead to the development of new types of ultrathin insulation. "The idea is to multiply the interaction of electromagnetic waves with grey bodies – reflecting bodies, like metals, with very low emissivity and no transparency – in a very thin material," Simonis says. "It can be done by either a multilayer or a kind of 'fur' optimized for that purpose."

High-resolution images are available to members of the media upon request. Contact Angela Stark, astark@osa.org. 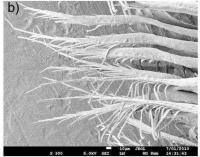