They may be viewed by some as an invasive species or a commonplace pest of public parks, but a new study from the University of Exeter has shown that grey squirrels are actually quick learners capable of adapting tactics to improve efficiency and reap the best rewards.

To test the animals' intelligence and mental flexibility researchers invented a task involving a box with 12 sunken wells, four of which were hollow. Of the four, two contained hidden hazelnuts.

The five squirrels observed in the study (named Simon, Arnold, Sarah, Leonard and Suzy) were all given training prior to the task so they were proficient at using their paws or teeth to peel back the layer of paper hiding a nut inside the wells.

The hazelnuts were placed in the wells diagonally across from each other, meaning that the least efficient way for the squirrels to locate the food was to check each well in a clockwise or counter-clockwise sequence, and the most effective was an 'integrative' approach where squirrels checked only the two diagonal wells that contained food, ignoring the two empty wells.

In the study, published today in the Journal of Experimental Psychology: Animal Learning and Cognition, all of the squirrels showed clear improvement over successive attempts with the box, becoming more efficient in adjusting their behaviour to adapt to the task.

Lead author of the study, Pizza Ka Yee Chow of the University of Exeter, explained: "This was only a small study but the results are quite remarkable - the squirrels learned to pick the diagonally opposite well if the first one they picked contained a nut. They made a decreased number of errors as they learned and progressively changed their tactic to increase efficiency and obtain the hidden rewards."

Co-author Dr Lisa Leaver of the University of Exeter added: "We predicted that squirrels would be quick to learn this task because learning spatial arrays is crucial for them in order to recover their food caches in the winter months. These results are interesting because they don't just show that the squirrels were quick to learn about changes in food location, they also give some indication about how they learned to complete the task. This is an area that we are investigating in more detail in order to understand how animals in general and squirrels in particular learn about changes in the environment. Flexibility in learning might allow particular species like squirrels to be successful invaders, and understanding more about their learning processes may be the first step in helping to control invasive species."

'Serial Reversal Learning in Grey Squirrels: Learning Efficiency as a Function of Learning and Change of Tactics' by Pizza K. Y. Chow, Lisa A. Leaver, Ming Wang and Stephen E. G. Lea is published in the Journal of Experimental Psychology: Animal Learning and Cognition. 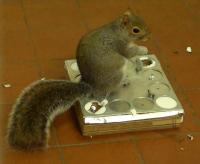