An international team of scientists and industrialists is to meet at the University of Leicester to develop of a revolutionary new technique for harnessing green energy.

Norwegian company EnSol AS has patented a ground breaking, novel thin film solar cell technology which they seek to develop commercially by 2016.

The company is now working with experts in the University of Leicester Department of Physics and Astronomy to develop the revolutionary new type of solar cell material that could be coated as a thin film on, for example, windows in buildings to produce power on a large scale.

Professor of Nanotechnology at the University of Leicester, Professor Chris Binns, said the collaboration offered a tremendous opportunity to develop a new method for harnessing solar energy:

"The material has been designed by EnSol AS and is based on nanoparticles that can be synthesised in Leicester. In fact, following some initial investment by the company, the equipment we have here at the University of Leicester is uniquely suited in the world to produce small amounts of the material for prototypes

"The work is important since the solar cells are based on a new operating principle and different to Si solar cells. One of the key advantages is that it is a transparent thin film that can be coated onto window glass so that windows in buildings can also become power generators. Obviously some light has to be absorbed in order to generate power but the windows would just have a slight tinting (though a transmission of only 8-10% is common place for windows in the "sun belt" areas of the world) . Conversely the structural material of the building can also be coated with a higher degree of absorption. This could be side panels of the building itself, or even in the form of "clip-together" solar roof tiles.

"Also since it is a thin film that can be coated onto large areas it could become very much cheaper than conventional devices.

"Photovoltaics are destined to form a key power generating method as part of a low carbon economy and the new technology will bring that a stage closer."

The material is composed of metal nanoparticles (diameters ~ 10 nm) embedded in a transparent composite matrix..

A spokesperson for EnSol AS said: "The basic cell concept has been demonstrated, and it will be the objective of this research and development project to systematically refine this PV cell technology to achieve a cell efficiency of 20% or greater.

"A thin film deposition system with nanoparticle source, will be designed and constructed in collaboration with the University of Leicester for the fabrication of prototype cells based on this design.

"This experimental facility will be designed to produce PV cells with an active area in excess of 16 cm2 (40 mm x 40 mm) deposited onto standard glass substrates. These prototype cells will subsequently be characterised and tested in collaboration with our academic partners.

Please click on the link: http://www.ensol.no for details of the meeting at the University of Leicester.

2pm on Tuesday 10th August in the Physics building, University of Leicester. The actual synthesis equipment will be available for photographing. Camera crews will be able to film in video or stills the participating partners in the project and also any of the equipment involved in the manufacture of the prototype solar cells.

If media need to film/photograph equipment in advance, this can be done by arrangement on Friday or Monday- contact Chris Binns- +44 116 2523585 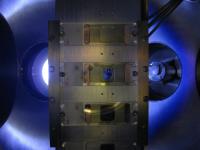 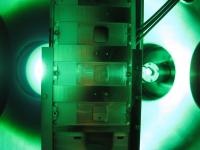