Scientists and veterinarians working for WCS's New York Aquarium have discovered something noteworthy in the near shore waters of Long Island's Great South Bay: a nursery ground for the sand tiger shark, a fearsome-looking but non-aggressive fish.

The discovery was made by researchers who have collected a wealth of information on sharks in local waters over the past four years through the use of acoustic tags, devices that enable scientists to remotely track marine animals as they swim through their environment. These data have helped the scientists confirm the existence of the nursery in Great South Bay, one of the rich estuaries found along Long Island's southern shore. Only a handful of sand tiger shark nursery grounds have been identified, one of which is in the waters of Massachusetts.

"The discovery of a shark nursery is fantastic news for local conservationists seeking to learn more about sharks and other species in the New York Bight," said Jon Dohlin, Vice President and Director of WCS's New York Aquarium. "Through field projects and outreach efforts by the New York Aquarium and other organizations, we hope to raise awareness about our local marine environment and the need to manage our natural wonders."

The team received the first indications of a potential nursery ground in Great South Bay in 2011 when one of the scientists received a picture of a dead juvenile sand tiger shark from one of the marinas. Follow-up conversations with local anglers and boaters revealed that people had been catching these small sharks in the bay for years. The scientists then initiated the tagging study using acoustic transmitters in Great South Bay and have been catching and releasing only juvenile sharks since that time. Ten of the 15 were individual sharks tagged this year, and five individuals tagged in previous seasons returned to the same section of the bay, a behavior known as "site fidelity."

Data gathered from the sharks' movements are helping scientists learn more about the migratory behavior of sand tiger sharks and their habitat needs. The discovery of the Great South Bay shark nursery in particular is important because the sand tiger shark has been heavily depleted by fishing and is listed as a "Species of Concern" by the U.S. National Marine Fisheries Service. Fishing for sand tiger sharks has been prohibited in state and federal waters since 1997. The species has a low reproductive rate--a female shark gives birth to only one or two pups every two years--so it will take this sand tiger shark population many years to rebuild. Protecting the nursery will help promote sand tiger shark recovery in the coastal waters of the eastern United States.

"Sand tiger shark pups are not born here but migrate from down south to spend the summers as juveniles in New York's coastal waters," said Dr. Merry Camhi, Director of the NY Seascape program, WCS's local marine conservation program. "The acoustically tagged animals in our study will help us better understand where the sharks go, their habitat needs, and how we can better protect them."

The Great South Bay shark nursery provides juvenile sand tiger sharks ranging from several months to five years in age with a place to feed and grow. A nursery also gives juvenile sharks protection from predators, including other sharks. After birth off the southeastern United States (sand tiger sharks give birth to live young as opposed to laying eggs), the juvenile sharks migrate north in the spring and spend the summer in New York waters before returning south in the fall.

There are still many unknowns about the nursery. Scientists are not sure how much of the bay is used by these sharks, the number of young sharks in the bay each summer, or what the sharks are eating. More work is being done, including health studies, to address these and other questions. Recreational and commercial fishing for sand tiger sharks is prohibited in Great South Bay and in all state and federal waters. However, the Great South Bay is not protected and a great deal of boating, recreational fishing, dredging, and other human activities take place there. Outreach to the public, especially anglers, is also underway to help improve the conservation status of sand tiger and other local sharks and rays.

Growing up to 10 feet in length, the sand tiger shark is widely distributed and found in the temperate water and subtropical waters of many of the world's coastlines. Although it is not known how many sand tiger sharks remain, the species is listed as globally "Vulnerable" on the IUCN's Red List of Threatened Species, while populations in parts of Australia and Argentina are classified as "Critically Endangered." The NY Seascape program is collaborating with WCS shark scientists from Argentina to improve the understanding of sand tigers in the Southwest Atlantic, which have been severely depleted by overfishing.

The work is part of an initiative by WCS's NY Seascape program based out of WCS's New York Aquarium to study and protect sharks and rays in the New York Bight, the region between Long Island's Montauk Point and New Jersey's Cape May that extends out to the continental shelf and over the Hudson Canyon. More than 40 species of sharks and rays are known to occur in these waters.

In addition to the sand tiger study, NY Seascape researchers attached archival satellite tags to two blue sharks in the waters south of Long Island in 2015. These tags will gather data for 6 months before they are scheduled to pop off and begin broadcasting archived location data back to the research team. They also tracked three juvenile shortfin mako sharks and one blue shark tagged with near real-time satellite monitoring tags in 2014.

Sharks will be the central focus of Ocean Wonders: Sharks!, a 57,000-square-foot exhibit building currently under construction at the New York Aquarium. The building will house more than 115 marine species, including sharks, skates, and rays. It will be a destination for education and conservation programming, with important benefits for the economy of Coney Island, Brooklyn, and all of New York City.

In addition to shark research, the NY Seascape program is launching an initiative to study and protect several species of great whale that migrate through New York waters. Restoring migratory fish habitat in the Bronx River, which runs through the Bronx Zoo, is another program focus. NY Seascape staff are examining the movements of American eels and alewife herring in New York City's last remaining freshwater river.

This work was generously supported by the Sarah K. DeCoizart Article TENTH Perpetual Charitable Trust. Aerial photography of the NY Seascape's research area is supported by the volunteer pilot organization LightHawk, whose mission is to accelerate conservation success through the powerful perspective of flight.

WCS (Wildlife Conservation Society) MISSION: WCS saves wildlife and wild places worldwide through science, conservation action, education, and inspiring people to value nature. To achieve our mission, WCS, based at the Bronx Zoo, harnesses the power of its Global Conservation Program in nearly 60 nations and in all the world's oceans and its five wildlife parks in New York City, visited by 4 million people annually. WCS combines its expertise in the field, zoos, and aquarium to achieve its conservation mission. Visit: newsroom.wcs.org Follow: @WCSNewsroom. For more information: 347-840-1242.

Wildlife Conservation Society's New York Aquarium is open every day of the year. Summer hours are 10 a.m. to 6 p.m. daily. Fall/winter/spring hours are 10 a.m. to 4:30 p.m., daily. Tickets are $11.95 per person (ages 3 & up), and include Aquarium admission plus one admission to the new 4-D Theater; children age 2 and under are admitted free. Fridays after 4 p.m. in the summer and after 3 p.m. in the fall, Aquarium admission is by pay-what-you-wish donation. The aquarium is located on Surf Avenue at West 8th Street in Coney Island. The New York Aquarium is located on property owned by the City of New York, and its operation is made possible in part by public funds provided through the New York City Department of Cultural Affairs. For directions, information on public events and programs, and other aquarium information, call 718-265-FISH or visit our web site at http://www.nyaquarium.com. Now is the perfect time to visit and show support for the WCS New York Aquarium, a beloved part of Brooklyn and all of the City of New York. Due to Hurricane Sandy we are partially opened. Check our website for more information. http://www.nyaquarium.com. 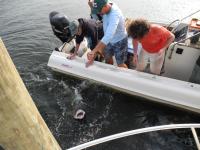 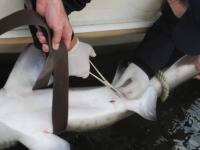