Pulling that final zipper closed on a stuffed suitcase or getting the tailgate of a packed car shut is a true feeling of victory at the start of any road trip. Sending supplies to the International Space Station--including on NASA's SpaceX Demo-2 test flight that launched the first astronauts Robert Behnken and Douglas Hurley on SpaceX's Crew Dragon capsule May 30 from NASA's Kennedy Space Center in Florida--requires a different packing method and special lockers to transport supplies.

Four such lockers launched on Demo-2 were built by students from around the country through a program called NASA HUNCH--High school students United with NASA to Create Hardware. HUNCH's goal is to empower and inspire students through a project-based learning program and by providing opportunities to students to play an active role in the space program.

One student-built locker also will return to Earth from the space station at the end of the mission. The lockers contain important supplies for space station maintenance and daily operations.

"It is exciting for us and the students," said Bob Zeek, NASA HUNCH co-founder and project resource manager at NASA's Marshall Space Flight Center in Huntsville, Alabama. "Even with 70 HUNCH-built lockers delivered to the International Space Station Program and 58 of those flying to the space station, the Demo-2 flight adds a new flavor."

Each locker is comprised of approximately 280 components, including 41 parts machined by the students and more than 200 rivets, fasteners and bearings. The pieces are manufactured with high precision to the tight tolerances required of any piece of hardware making the journey to the orbiting laboratory.

Schools in all four time zones across the United States contributed to the creation of the lockers, including schools that regionally supported the Johnson Space Center, Glenn Research Center, Kennedy Space Center, Marshall Space Flight Center and Langley Research Center. For example, students from Grissom High School in Huntsville, Alabama, created the rear close-out plates, while the integration of the lockers was done at Clear Creek High School in League City, Texas.

Launched in the four lockers stowed beneath the seats of astronauts Hurley and Behnken were: 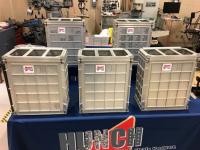 Lockers built by students in the HUNCH Program