A team of scientists working at the U.S. Department of Energy's (DOE) Argonne National Laboratory and led by Northern Illinois University physicist and Argonne materials scientist Zhili Xiao has created a new material, called "rewritable magnetic charge ice," that permits an unprecedented degree of control over local magnetic fields and could pave the way for new computing technologies.

The scientists' research report on development of magnetic charge ice is published in the May 20, 2016 issue of the journal Science. With potential applications involving data storage, memory and logic devices, magnetic charge ice could someday lead to smaller and more powerful computers or even play a role in quantum computing, Xiao said.

Current magnetic storage and recording devices, such as computer hard disks, contain nanomagnets with two polarities, each of which is used to represent either 0 or 1 -- the binary digits, or bits, used in computers. A magnetic charge ice system could have eight possible configurations instead of two, resulting in denser storage capabilities or added functionality unavailable in current technologies.

"Our work is the first success achieving an artificial ice of magnetic charges with controllable energy states," said Xiao, who holds a joint appointment between Argonne and NIU. "Our realization of tunable artificial magnetic charge ices is similar to the synthesis of a dreamed material. It provides versatile platforms to advance our knowledge about artificial spin ices, to discover new physics phenomena and to achieve desired functionalities for applications."

Over the past decade, scientists have been highly interested in creating, investigating and attempting to manipulate the unusual properties of "artificial spin ices," so-called because the spins have a lattice structure that follows the proton positioning ordering found in water ice.

Scientists consider artificial spin ices to be scientific playgrounds, where the mysteries of magnetism might be explored and revealed. However, in the past, researchers have been frustrated in their attempts to achieve global and local control of spin-ice magnetic charges.

To overcome this challenge, Xiao and his colleagues decoupled the lattice structure of magnetic spins and the magnetic charges. The scientists used a bi-axis vector magnet to precisely and conveniently tune the magnetic charge ice to any of eight possible charge configurations. They then used a magnetic force microscope to demonstrate the material's local write-read-erase multi-functionality at room temperature.

For example, using a specially developed patterning technique, they wrote the word, "ICE," on the material in a physical space 10 times smaller than the diameter of a human hair.

Magnetic charge ice is two-dimensional, meaning it consists of a very thin layer of atoms, and could be applied to other thin materials, such as graphene. Xiao said the material also is environmentally friendly and relatively inexpensive to produce.

Yong-Lei Wang, a former postdoctoral research associate of Xiao's, is first author and co-corresponding author on the Science article. He designed the new artificial magnetic ice structure and built custom instrumentation for the research.

"Although spin and magnetic charges are always correlated, they can be ordered in different ways," said Wang, who now holds a joint appointment with Argonne and Notre Dame. "This work provides a new way of thinking in solving problems. Instead of focusing on spins, we tackled the magnetic charges that allow more controllability."

There are hurdles yet to overcome before magnetic charge ice could be used in technological devices, Xiao added. For example, a bi-axis vector magnet is required to realize all energy state configurations and arrangements, and it would be challenging to incorporate such a magnet into commercial silicon technology.

But in addition to uses in traditional computing, Xiao said quantum computing could benefit from magnetic monopoles in the charge ice. Other potential applications of magnetic charge ice might include enhancement of the current-carrying capability of superconductors.

The research was conducted at Argonne National Laboratory with funding from the DOE's Office of Science and the National Science Foundation. 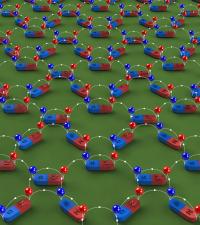