A multidisciplinary team of researchers at KU Leuven (University of Leuven, Belgium) has developed a dental implant that gradually releases drugs from a built-in reservoir. This helps prevent and fight infections.

Our mouth contains many micro-organisms, including bacterial and fungal pathogens. On traditional dental implants, these pathogens can quickly form a so-called biofilm, which is resistant to antimicrobial drugs like antibiotics. As a result, these implants come with a significant risk of infections that may be difficult to treat.

KU Leuven researchers have now developed a new dental implant that reduces the risk of infections. "Our implant has a built-in reservoir underneath the crown of the tooth," explains lead author Kaat De Cremer. "A cover screw makes it easy to fill this reservoir with antimicrobial drugs (see image 1). The implant is made of a porous composite material, so that the drugs gradually diffuse from the reservoir to the outside of the implant, which is in direct contact with the bone cells (see image 2). As a result, the bacteria can no longer form a biofilm."

In the lab, the implant was subjected to various tests for use with chlorhexidine, a universal mouthwash with a powerful antimicrobial effect. The study shows that the Streptococcus mutans, a type of mouth bacteria that affect the teeth, can no longer form biofilms on the outside of the implant when the reservoir is filled with the mouthwash. Biofilms that were grown beforehand on the implant could be eliminated in the same way. This means that the implant is effective in terms of both preventing and curing infections. 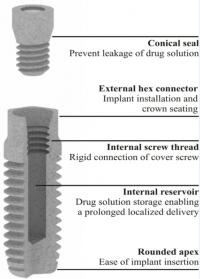 Conceptual Design of the Dental Implant