Elephants and lions are iconic species that help raise substantial funds for conservation. However, they also pose significant threats to people, crops, and livestock, and are themselves threatened with extinction.

Areas at severe risk are identified

In a new article published in the journal Nature Communications, scientists have identified the areas that are most at risk for conflicts between humans and elephants and lions in Africa. They also estimated the associated return on investment of building and maintaining high-quality fences, which are used to reduce conflict between humans and wildlife.

Associate Professor Enrico Di Minin, who is the lead author of this article and leads the Helsinki Lab of Interdisciplinary Conservation Science at the University of Helsinki, highlights that human pressure on elephants and lions is extremely high.

"We found that 82% of sites containing lions and elephants in Africa are adjacent to areas with considerable human pressure", says Di Minin.

"Areas at severe risk of conflict (defined as areas with high densities of humans, crops, and cattle) comprise 9% of the perimeter of these species' ranges and are found in 18 countries hosting, respectively, ~ 74% and 41% of African lion and elephant populations", he continues.

African forest and savanna elephants have recently been classified as Critically Endangered and Endangered in the IUCN Red List of species, while African lions are classified as Vulnerable. Human activities pose the greatest threats to these species, particularly retaliatory killings of lions in response to livestock losses and of elephants in response to crop damage. Elephants and lions also kill dozens to hundreds of people each year.

"We found that elephants and lions are now most abundant at localities where human population density is lowest. At a national scale, lion populations are higher in countries where funding for conservation is higher and elephant numbers are higher in countries with higher gross domestic product per capita", states Professor Rob Slotow from the University of KwaZulu-Natal in South Africa

"We also found that areas at high risk of conflict are especially found in East and West Africa", he continuous.

Although a variety of conflict mitigation strategies could be deployed to address human-wildlife conflict, the team has assessed the return on investment of deploying high-quality mitigation fences, which have been found to be effective in reducing human-wildlife but are very expensive to build and maintain.

"Our results show how mitigation fences would provide considerable return on investment via reduced cattle loss and crop damage, especially in Tanzania, Ethiopia, and Kenya", says Professor Craig Packer from the University of Minnesota in the US.

"Our analysis reveals the location of about 10,000 kms of protected-area boundaries immediately adjacent to landscapes with such high densities of people, farmland and cattle pastures that wildlife movements have already been largely blocked. Mitigation fencing would merely reflect the reality of conserving large, dangerous, wildlife species in the Anthropocene. More and more African countries are starting to rely on mitigation fencing to better protect their citizens from the most dangerous wildlife species.", he continues.

The authors highlight how attention should be paid to prevent further habitat fragmentation for any migratory species that still manage to traverse the worst affected areas and to carefully consider the values, preferences, and motivations of local people before building mitigation fences.

"However, areas of intensive human pressure already produce hard boundaries around remaining areas of natural habitat and bold strategies to conserve these species are immediately needed, especially as human pressure will increase in the future with Africa experiencing very high human population growth by the end of the century", concludes Associate Professor Enrico Di Minin.

High risk of conflict between humans and elephants and lions 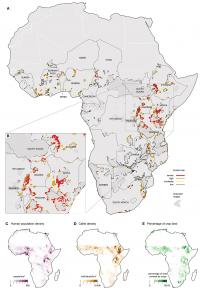